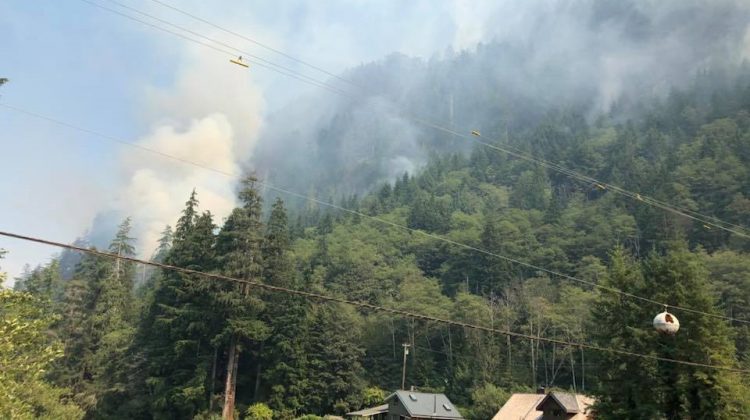 The fire in Zeballos is pictured on August 17th. Photo courtesy of Ernest Smith.

ZEBALLOS, B.C. – Zeballos Mayor Julie Colborne is calling on the province to help the village.

Zeballos’ village council decided to extend the evacuation order in last week’s meeting. But according to mayor Julie Colborne, it was to keep the residents safe until real help and mitigation comes to the village.

The order was put in place due to a landslide risk in the community, following damage to the surrounding slopes from a forest fire in the summer.

“Nothing has changed; there is no less risk. So that means that we couldn’t take the evacuation order off,” Mayor Colborne said.

“We’re really concerned about winter coming; a lot of these people (residents under evacuation order) were travelling in and out on roads that may get snowy and icy. One of these people were living in an RV in the RV park – it’s winter time, that’s not a solution.”

She said the decision to extend the evacuation order also means emergency social services support will be available to the residents who need it.

Mayor Colborne added that the village council has written letters to the provincial government to bring attention to the situation. She said they want to see if Zeballos is eligible for disaster financial assistance.

Mayor Colborne said they have been waiting to hear back from Minister Farnworth regarding disaster assistance since October.

“We’ve also been talking to Minister Donaldson, the Minister of Forests, and talking about who’s going to monitor the hill, are they watching what kind of debris is coming down currently? How can they monitor the hillside for us so we have real data?”

Mayor Colborne said the affected area is Crown land, which means redirecting debris or monitoring the slope is the responsibility of the province.

“No one seems to be monitoring (the situation). Except for the Ministry of Transportation, there’s a piece of their land that’s affected, and they’re monitoring that,” Mayor Colborne said.

According to Mayor Colborne, that piece of road is towards the east side of the village, from the cemetery and into Zeballos.

Mayor Colborne said she hopes the council hears back from the Ministry of Public Safety soon so the village can move forward.