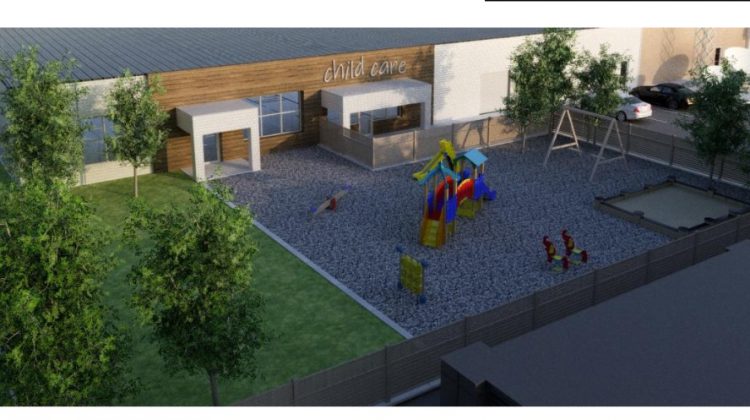 A draft image of the daycare centre, attached to the Courtenay city council agenda on December 3rd, 2018.

COURTENAY, B.C- A Comox Valley non-profit is looking to start up a daycare service.

On Monday evening, Courtenay city council were asked to approve rezoning for a renovation to the Wachiay Friendship Centre, located along McPhee Avenue.

The organization is seeking to put together a daycare in order to expand their range of services that they currently offer. The daycare is meant to be associated with an adult education program.

“Future plans include the possibility of constructing additional day care spaces within the building to be operated separately from the education and skills training program,” read the council agenda section dealing with the idea.

“The current building footprint will remain the same as no major exterior alteration or addition is proposed except new outside covered play area proposed for the west side of the property.”

Staff have also proposed to define the site as a “family development centre”.

The rezoning passed first and second reading without opposition.

After the meeting, mayor Bob Wells was positive about the decision, saying that the need for daycare spaces in the Comox Valley was “staggering”.

“Making sure that we have the best daycare possible and an adequate amount of it, quality and quantity, whatever you’re talking about those are two the key ingredients,” said Wells.

“Right now, I would say we’re well below the quantity of daycare that we need, and I know they’ll do a great job.”

He believed the daycare service would be a “natural extension” of what Wachiay already offers.

The rezoning will return to the council chamber before final approval.