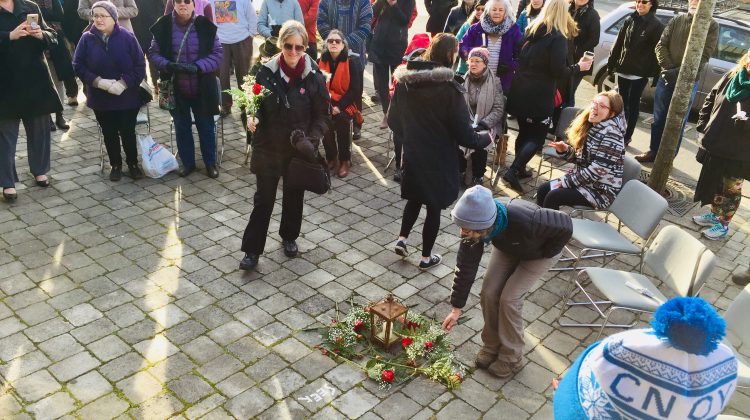 People who took part in a vigil on Thursday, December 6th put down roses around a lantern holding a single candle in front of the Comox Valley Art Gallery. Photo by Troy Landreville/98.9 The Goat/Vista Radio

COURTENAY, B.C. – A group of people gathered in front of the Comox Art Gallery at lunchtime today to remember missing and murdered women.

December 6 marks the 28th anniversary of the Montreal Massacre, when a gunman murdered 14 women at  École Polytechnique in Montreal, for the simple fact that they were female.

In honour of the National Day of Remembrance and Action on Violence Against Women, the Comox Valley Transition Society and Honouring Our Sisters hosted the vigil.

The event was a way to not only remember victims of the mass shooting in 1989, but all women who have been murdered or have gone missing over the past nearly three decades.

Speeches were followed by a moment of silence and songs including ‘This Little Light of Mine’ as people put down roses around a lantern containing a single candle. 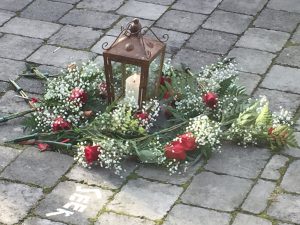 Comox Valley Art Gallery executive director Sharon Karsten said the large crowd that gathered at the gallery showed “that we can find solutions, that we can take action, that we can remember together, and that we can move forward into a new reality.”