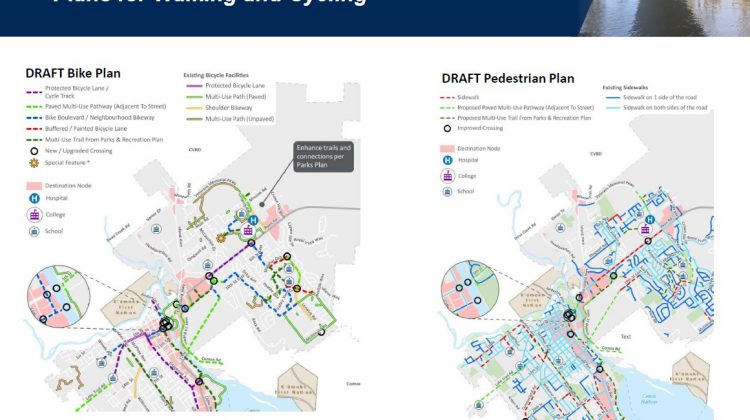 The slide from the draft master transportation plan included in a November 26th presentation to Courtenay's city council.

COURTENAY, B.C- The way that Courtenay residents get around the Valley could be changing in the future.

In late November, Courtenay city council were presented with a report on decisions they could make for refurbishment of the Fifth Street Bridge. The bridge is in need of repairs, and costs have been rising.

In that same report, a map of the draft transportation master plan being worked on for the city government was also included.

The map shows paths and routes that the city could take when it comes to planning for pedestrians and cyclists within Courtenay’s borders, with a multi-use path plotted out over the ALR lands in the middle of town, and enhanced paths along existing routes.

According to Courtenay Mayor Bob Wells, council will be discussing the draft transportation master plan during their own strategic planning. One of things that he wanted to explore prior to having any decisions made was grant funding opportunities.

“We want to make sure we explore all of those, so staff, I think, are working very hard right now to make sure that if there are any opportunities out there, that we’re made aware of them as soon as possible so we can make the best decision,” said Wells.

As for the possibility of a path going across the ALR land, Wells believed it could be a challenge, but it could be an opportunity to put paths in and have a positive impact on the community.