DENMAN ISLAND, B.C. – The Denman Island ferry terminal is lighting up the night sky a little too much. That’s according to a concerned resident.

She said one of her favourite things about growing up on Denman Island was watching the stars at night. 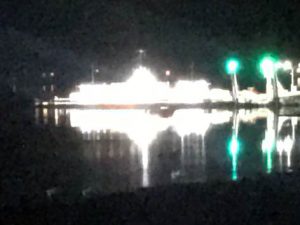 The lights displayed at the Denman West ferry terminal, courtesy of Andriana Beauchemin.

However, Beauchemin said since the new ferry terminal was installed at Denman West to connect with Vancouver Island’s Buckley Bay, watching the night stars is not really a possibility, because of the lights emitted from the docking station.

“Not only is the night sky no longer visible, but having this level of lighting on all night is a huge waste of energy, creates a large amount of light pollution affecting nocturnal animals, all while negatively impacting the well being of the numerous occupants along the west side of the island,” she wrote.

Beauchemin said she’s reached out to BC Ferries.

The ferry service spoke with MyComoxValleyNow.com about the concerns.

Executive Director of Public Affairs, Deborah Marshall, said the LED lighting has been dimmed to its lowest possible setting since being installed.

She noted that the company has also added shields to minimize the brightness.

Marshall explained that the lighting is for safety reasons. She said the lights assist with sailings after dark and brighten the area for the night watchmen on duty at the ferry terminal.