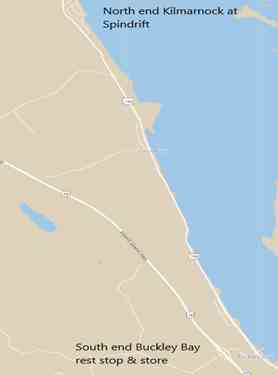 A map of the affected area. Image sourced from the Union Bay Improvement District.

According to an announcement from the Union Bay Improvement District (UBID), the boil water notice is effective for all users of the district’s water system. The system runs from the north end of Kilmarnock, south to the Buckley Bay rest stop.

“It is advised to boil water for one minute prior to consumption or prior to washing vegetables, teeth brushing or food preparation,” read the notice.

“UBID is continually monitoring the water quality and will provide updates as they become available. Watch for updates at www.union-bay.ca and listen to your local radio stations for more information. This notice is effective until further notice.”

Additional information was included with the boil water notice about turbidity and how Union Bay handles the issue.

“New health regulations require that a turbidity level of 1 NTU initiates a response chain, which starts with increased communications between the water supplier and the health authorities,” stated the notice.

“UBID has adopted a rigid Turbidity Response Tree that adheres to current regulations and have been approved by the Drinking Water Officer at Island Health. High turbidity can interfere with the treatment process and the disinfection of water with chlorine by creating a ‘hiding place’ for potential pathogens.”

The suspected cause of the increase in turbidity is the heavy rainfall and winds.

The rest of the notice is included in full below.

UBID has increased monitoring of turbidity, bacteriological samples and chlorine residue and will continue to update those affected of any changes.

Tap water should be boiled for one minute. Use any clean pot or kettle.  Kettles that have automatic shut offs are acceptable.  After boiling, let the water cool by leaving it on the counter or in the refrigerator in covered containers. After water is boiled it can be stored in food grade containers at room temperature or in the refrigerator.

Q.: When will the notice be lifted?

The notice will be lifted once the health authorities, in conjunction with the Superintendent of Waterworks, have concluded that the potential risk has been mitigated.

Q.: What are the health risks during a boil water notice?

The health risks associated with ingesting water that has not been boiled are hard to estimate.  The Notice was issued because conditions exist that make it impossible to ensure the safety of the water without boiling it first.  The risk could be low if no actual contamination occurred or very high if pathogens are present.  However, you can be confident that boiling your tap water for one minute is sufficient to destroy any pathogens that are present in the water.

It is important to note that Boil Water Notices are specific to microbiological threats. They are not appropriate to address threats from chemical contamination. Boiling chemically contaminated water will only result in the chemical becoming more concentrated or release the chemical into the air where it could be inhaled.  In such cases a different kind of Notice would be used.

Q.: What should I do once the notice has been lifted?