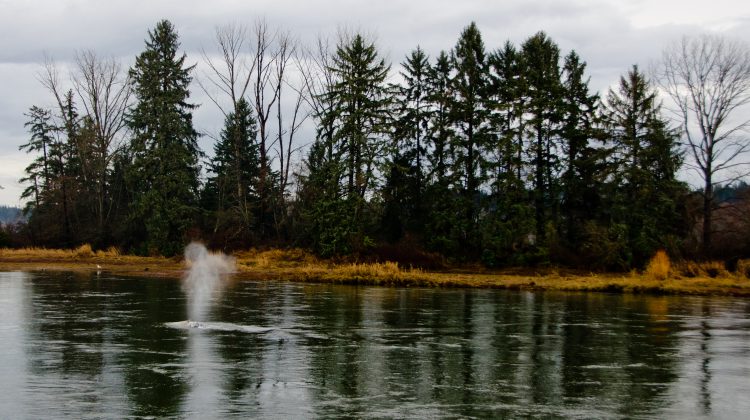 COURTENAY, B.C. – A whale was spotted swimming around the Courtenay River today.

It’s uncertain whether it’s a humpback or a grey whale. It was hanging around the river near the Courtenay Airpark floatplane ramp around 9:50 this morning. 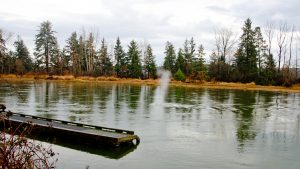 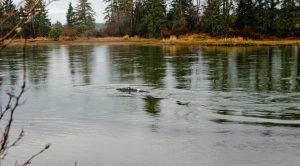 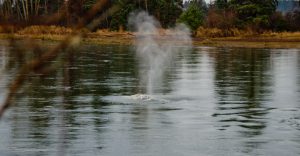 Courtenay resident Ken Wesner was drinking his morning coffee at roughly 7:00 a.m. this morning when he heard a blowing sound.

“It was dark out, and I thought it was maybe a sea lion but it didn’t quite sound right,” Wesner said. “I thought it was a blow (sound). Then, sure enough, another five minutes later I could hear the blow, it was too dark to get a visual of it, but I could see the spray so I knew it was a whale of some kind.”

As it started getting lighter, Wesner didn’t see a dorsal fin so he knew it wasn’t a killer whale.

Having lived on the coast all of his life, Wesner guessed it was a grey whale.

“He spent the last two hours drifting down (the rivermouth). I thought it maybe was making its way out because of the tide dropping, but now its coming back up the river,” Wesner said.

Wesner said the close encounter was “as good as it gets.”

The Coast Guard is aware of the whale’s presence.

She added, “There is an increase in population in whales around here, so it’s not really surprising.”

Taylor said grey whales are not common in the Gulf of Georgia or the Salish Sea because they don’t make their way through inside passages that much, but they are very common further north and south.

In the mid-summer, a transient killer whale took up residence in the harbour before it was lured away by whale recordings.

According to the Department of Fisheries and Oceans (DFO), acoustic playback equipment was used to get the whale moving on Aug. 2.

The agency used a set of recordings from a pod T073B had been travelling with in the past, which caught the animal’s attention.

“People lined the walkway and watched it for hours and hours, just waiting for a sighting,” Taylor recalled.

“It’s pretty exciting, especially if they do a few jumps and breaches and stuff.”

By reporting your cetacean (whale, dolphin, and porpoise) and sea turtle sightings, you are directly contributing to conservation-based research, according to the network.