Comox Valley students deliver bags of love to those in need 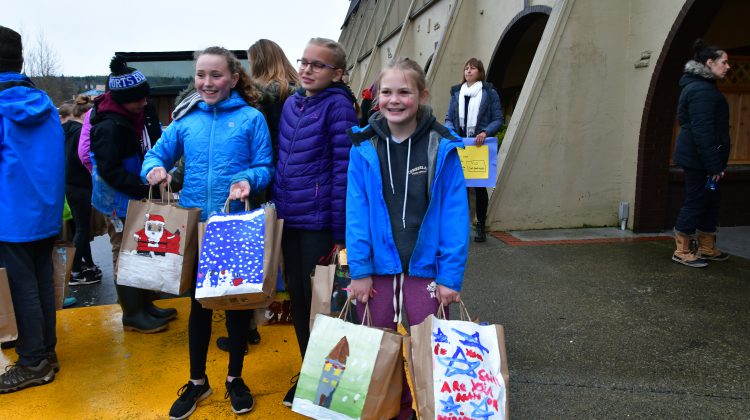 COMOX VALLEY, B.C. – Brightening the lives of those living on the street, or struggling to just get by, was a enriching experience for dozens of Comox Valley students and their teachers.

Students from across School District 71 took part in an Everyone Deserves A Smile (EDAS) project, where a variety of donations and cards were collected, put into gift bags, and hand-delivered to the homeless (or those on the edge of homelessness) across the valley and Vancouver Island.

Last weekend, a group of Grade 7 students from École Puntledge went on a “delivery road trip” across Vancouver Island, with stops at the AIDS Vancouver Island facility in Courtenay, Nanaimo’s Citizen Advocacy and 7-10 Club’s soup kitchen, and Rockbay Landing in Victoria.

“We had 19 schools working together. So École Puntledge Park Elementary has been our host school, they work really hard, (and) the whole school built the project together with our Grade 7s leading it. But we also had the help of 18 partnering schools.”

Last Friday, Queneesh Elementary students handed out gift bags to residents of Courtenay’s Pitcock Shelter, and on Saturday, students from Cumberland Community School delivered them to residents of the Maple Pool Camp.

“All (last) weekend long for about four days was our students handing out to about 600 people locally in the Comox Valley,” Stefan said.

Stefan said the recipients were filled with gratitude and love and hope.

She said it was “mind-blowing ” to see how the experience impacted the students.

“(They learned that) people deserve to be seen and loved and cared for, no matter what their story,” Stefan said.

École Puntledge Grade 7 students Jessie Hall and Joel Baker spoke about how the experience impacted them.

She added, “I’m very proud of all of the club and all of the other schools. It’s such a cool thing to do.”

“You don’t know what happened before, or how they got there,” Baker added. “They could have had a car accident or life could have hit them, maybe they couldn’t keep up with the rent… it’s hard for people.”

The giving continues this Saturday, when teachers from throughout the valley will travel to Vancouver’s East Hastings street, handing out gift bags at four shelters.

The motive behind the project is to connect students with homeless people across the valley and Vancouver Island.

The project has been running in the Comox Valley for 11 years, and it has been headquartered at École Puntledge Park Elementary for the past seven years.

Stefan shared how the project took wing: “It started in a back alley in downtown Edmonton. Right before Christmas, it was about minus-30 degrees outside. I got a really strong feeling, after seeing someone rummage through a garbage bin, to just help somebody smile that Christmas.”

She and four of her friends assembled 88 care packages, and hung them from garbage bins with the simple intent of giving strangers a little lift during the holiday season.

“Overnight, our 88 bags disappeared,” she said.