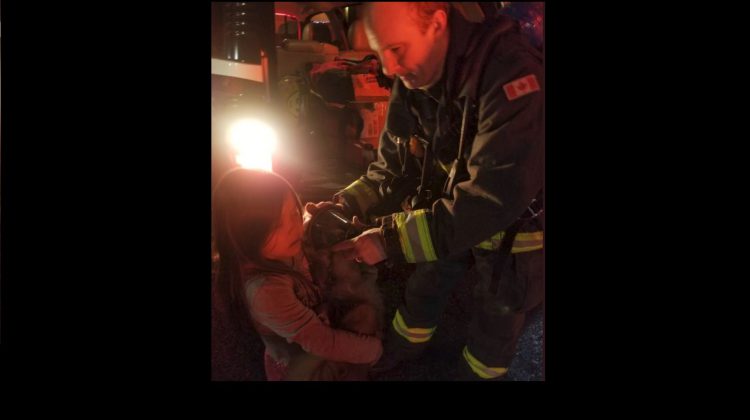 CAMPBELL RIVER, B.C. – Campbell River firefighters saved a small dog from a fire inside a multi-family building on Sunday night.

Firefighters rescued the dog from the unit and utilized their pet oxygen equipment before reuniting the pet with its anxious little owner.

According to Campbell River fire chief  Thomas Doherty, crews got the call for a structure fire at the 400 block of Robron Rd. at around 8:15 p.m.

When firefighters arrived, they were met with a neighbour who said he heard a smoke alarm in the unit.

“And when he investigated, he could see fire through the window of the doorway,” Doherty said.

No one was home at the time so crews forced their way into the unit, where they quickly doused a small fire in the living room.

Firefighters searched the unit and found a small dog hiding in a bathroom.

They brought the dog outside where firefighters gave it some oxygen with pet oxygen masks.

Doherty said the dog was lethargic and “a little bit stressed with the action going on and the smoke in the building.”

“A little bit of oxygen revived him up and he was quite active when we handed him over to the owners,” he added.

It was an emotional reunion.

“Coming home to find the fire vehicles at their residence was a little bit of a shock for them, as well, so our firefighters also gave the small kid some little stuffed animals to hold onto during a difficult time like that,” Doherty said.

“The little child quite pleased to have the little puppy back in her arms.”