Ace Brewing would be located on Mansfield Drive in Courtenay. Photo courtesy the City of Courtenay, placed on a black background by the MyComoxValleyNow.com newsroom.

COURTENAY, B.C. – A new brewery could be coming to Courtenay.

At tonight’s council meeting, the city government will receive a report on a new liquor license application.

Ace Brewing Company Limited would be located at 150 Mansfield Drive.

The report recommends that the city post a notice on its website, requesting public input on the application.

The feedback would be reviewed at the January 21st council meeting.

Ace Brewing is in the process of making the application for a new brewery with a lounge endorsement to the Liquor & Cannabis Regulation Branch (LCRB).

In accordance with the Liquor Control and Licensing Act, the city’s government must gather feedback from residents. The website notice will be up for two weeks.

The site plan (left) and the building plan, courtesy the City of Courtenay.

The building to be used for the brewery includes space with Care Automotive Services, located on the southern unit of the building. The brewery would be housed in the northern unit.

The building was formerly the site of a car dealership.

According to the staff report, the company is not looking to make any changes to the exterior of the building except a few minor ones, including a new door, a fenced-in outside chiller, a new sign and painting.

The work inside the building to convert the space from a care dealership to a brewery would be done in accordance with the building code.

Council will also talk about a proposed changed to Gladstone Brewing.

The company is looking to create additional space by removing an electrical room, as well as small “under-utilized” space in the lounge area.

It’s also being suggested that the washrooms be moved to an area currently occupied by a small business on the west side of the building. 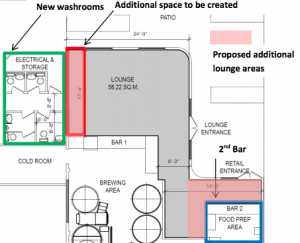 The company is also proposing to put in a second bar where the onsite store is located. No exterior renovations or alterations are being proposed.

With those proposed interior changes, occupancy in the brewery would change from 30 to 49.

It’s recommended that staff publish a notice on the city’s website requesting public feedback on the proposed structural change application.