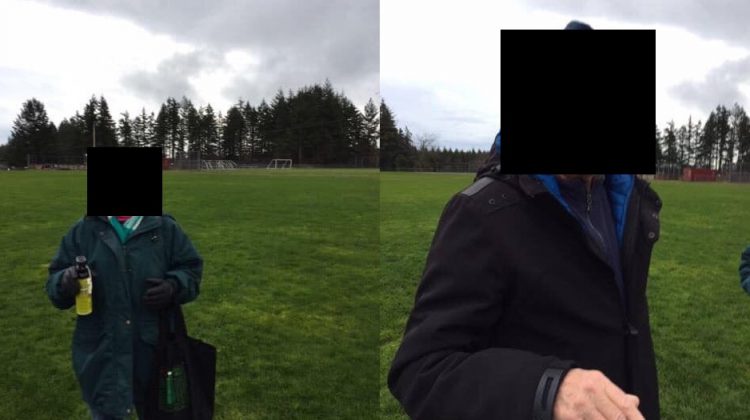 The couple are pictured in a pair of images sourced from Brenda Cardinal. The newsroom has blanked out their faces, as police have not charged or released the names of the couple.

COMOX, B.C- A pair of Comox seniors won’t be facing criminal charges after two incidents in the Northeast Woods.

During late November and early December, an older couple in the community had attracted police attention after a Labrador puppy was bear-sprayed in the conservation area. Police got involved after the run-in with a woman named Brenda Cardinal, who was walking her dog in the Highland Field area in December.

Photographs of the pair were released to social media by Cardinal , who later made a complaint to the RCMP and the town. Police confirmed they received a report, had identified the couple, and would follow up.

The Comox Valley RCMP has now confirmed that a police officer spoke with the couple “at length” about the risks associated to their behavior, and the potential situations they could find themselves in if their behavior continued.

“The Comox Valley RCMP anticipate that this will address any future concerns with this couple in the area; however, if there are any other incidents, please call the Comox Valley RCMP to report and they will be investigated at that time,” read a statement from the detachment.

Later in December, the Town of Comox announced they would not be enforcing on-leash rules at the Northeast Woods, and put up signage telling visitors that they may encounter off-leash dogs in the area.

It was described as a temporary measure, while the town government figures out where to put a possible dog park.

The MyComoxValleyNow.com newsroom reached out to the couple to get their thoughts on the actions taken by the police, and their take on the general situation.

We spoke with the woman, who asked to not be identified due to her concerns for her safety in the wake of what happened.

She indicated that she had started carrying the spray at the urging of her partner, after being diagnosed with a serious medical condition. Given her health, there was concern about the effects of getting knocked down by an off-leash dog, which had already happened once, before according to her.

She said the officer who spoke with them was “lovely” and had wanted to find out what was going on.

“I know what the obvious answer is. “Listen old lady, don’t go up there! You can walk in your own backyard.”, she said.

“That, I think, is an infringement on my civil rights. And the problem with the Town of Comox is I was told by the administrator that they are not going to enforce the bylaw that says dogs must be on-leash, and that I’m not allowed to tell anyone to tell anyone to put their dog on leash, that was the impression I got, even though there is a bylaw.”

She’s walked in the Northeast Woods conservation area once in the last two weeks, after initially thinking that she was being over-sensitive about off-leash dogs.

“The first dog I met was an off-leash Doberman,” she said.

She also agreed with the decision by the RCMP.

“I did nothing wrong,” she said.

“I did nothing wrong at all, except defend myself. I did nothing illegal, and that’s why no criminal charges were laid. You’re allowed to protect yourself.”

She’s now planning to contact other levels of government and conservation authourities about the Northeast Woods bylaw decision and signage made by the town, as she believed the municipal government had overstepped it’s authourity in the area.

A request for comment has been sent to the Town of Comox on the matter.

Asked about whether or not dog owners had a right to be angry about her actions, she was defensive.

“I don’t understand dog owners that feel that their dog has more rights than human beings,” she said.

“Do they have a right to be angry? If I attacked a dog without provocation, of course. But if the dog runs at me, growling, what is my defence?”

She stated she only had one run-in where she thought she had to use the spray, which took place in November.

“But I’ve always run away from the dogs before,” she said.

“I’ve gone into the woods, I’ve asked people to get their dogs away from me. People try, but their dogs are never under enough control, that they can get the dog away from me before I have to run, and I can’t do that anymore.”

Citing her medical condition, the woman questioned the existence of dog-spray.

“There is no such thing as cat-spray, or bird-spray, but dog-spray has been manufactured because it’s the only protection,” she said.

“I could carry a walking stick, and have my arm ripped off. I cannot defend myself from a dog that is threatening to attack me in any other way.”

Asked about her plans now, the woman indicated she was afraid of leaving the house, and has been walking in other areas without dogs.

“I’ll probably die here, because I’m afraid of dogs, and their owners,” she said.

“I’m not picking up anything (calls) that I don’t recognize, because I’ve had threats.”

She also said she’s reluctant to be anywhere near a dog.

“I’m afraid of dogs that run at me, who wouldn’t be? Or growl at me, or leap at me. These people that say their dogs have never done that, well good for them, but it has happened to me. In the last three months. That’s not that long, to have me chased, jumped on, and growled at, and there is, I think, a serious problem with dogs off leash, but obviously nobody else does. So I guess I’m the oddball. That’s all I can say.”