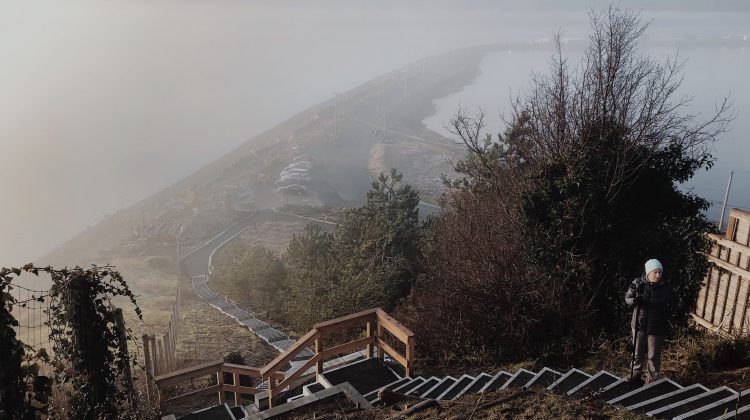 Goose Spit in the Comox Valley is pictured in a file photo from January 14th, 2018. Photo by James Wood/Vista Radio

VANCOUVER ISLAND, B.C. – The foggy conditions on eastern Vancouver Island and the Sunshine Coast will be sticking around until tomorrow.

“We’ve got a weather system coming, a rain system coming, so it’s expected with that, the winds will be picking up and with the rain, that fog will finally dissipate tomorrow afternoon for the rest of the week,” Hartt told Vista Radio.

She said that although the fog will be gone, that doesn’t mean residents can expect to see sunny skies.

“The reason the fog is ending is because of the system coming in, so that system is bringing increased cloudiness and maybe a few scattered showers, and some stronger winds,” she explained.

“Those scattered showers are going to intensify on Thursday to periods of heavier rain, and then we’re expecting periods of rain to last into the weekend.”

The good news however, is that drivers and pedestrians will be able to see a little bit clearer on the roads once the fog disappears.

“The problem with the visibility is that we really have to slow down our driving, but also the temperatures are quite low. We’re expecting temperatures to drop a couple of degrees tonight, and what happens then is we have freezing fog when temperatures are below zero,” she added.

“That can deposit on the surface and cause black ice. This evening, overnight and tomorrow morning, (residents) are gonna have to watch out for slippery sections on the roads.”