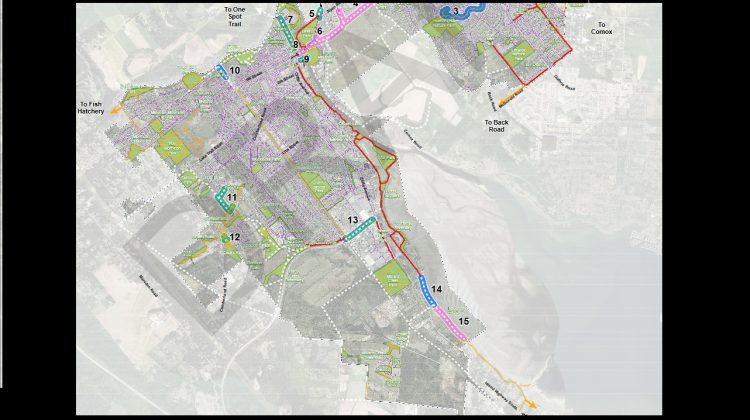 Partial map of potential trails in Courtenay, sourced from the draft plan.

COURTENAY, B.C- The next steps for Courtenay’s green spaces are coming up for discussion tonight.

According to the council agenda for January 21st, 2019, the city government hired Urban Systems to work on putting together a master plan for Courtenay’s parks and trails, and their future development.

That work ran from 2016 to 2018, and the draft plan is now coming to council for their input prior to release to the public.

“Once finalized and adopted, the Plan will be a tool for staff and council decision making, and will set the stage for Council’s consideration of levels of service, and the public’s willingness to pay,” read the agenda.

It will act as an overall guide for the municipal government, and does not commit them to any of the options outlined in the document.

One of the key findings outlined by the plan was that the city already has an “ample supply” of parkland, and the city should focus on their efforts on getting more to a few locations to support population growth.

Additional options outlined in the plan include re-designing of Lewis Park and the moving of its tennis facilities, additional tubing amenities at Lewis Park and Puntledge Park, and an off-leash park for Bill Moore/Dogwood Park in west Courtenay.

Connections between the Rotary Trail and Puntledge Park, as well as a trail connection along the Puntledge River between all four river parks, were listed in the master plan, along with expansions of the Courtenay Riverway north to Condensory Park and south to the Royston Seaside Trail.

It remains to be seen what council will make of the draft plan.