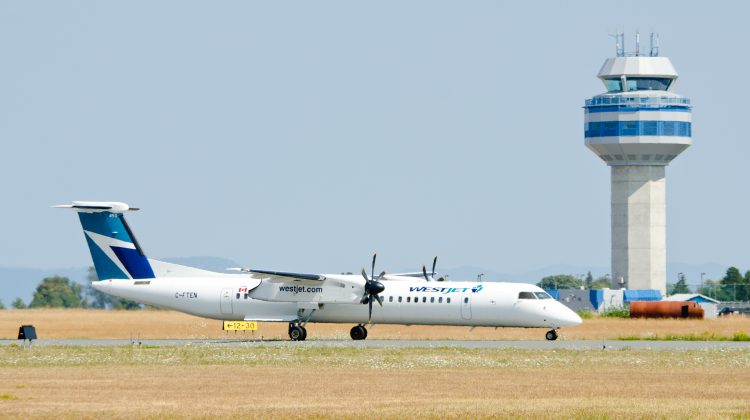 A Westjet plane lands at the Comox Valley airport on July 31st, 2018. Photo by James Wood/98.9 The Goat/Vista Radio

COMOX, B.C- Some leafy obstacles have been impacting flights at the Comox Valley Airport.

According to a report from the Comox Valley Record, some flights have recently been cancelled or re—routed due to trees impacting the safety margins of aircraft approaching or departing Comox.

Airport CEO Fred Bigelow is quoted by the paper, and indicated that 19 Wing Comox found the issue during routine survey work.

When obstacles, such as trees, exceed those margins, higher limits have to be used by aircraft to ensure safety. That can have a significant impact on some aircraft, depending on the navigational equipment they use, according to the paper’s report.

Flights from Westjet and Air Canada coming from Vancouver were cancelled on Tuesday, and a Pacific Coastal flight headed into Comox was diverted to Campbell River.

Bigelow said there isn’t much the airport can do until the limits are once again brought down, which he suspects should be sorted out in less than a week. He believed the base had a good plan, looking at the “most problematic trees”, and was working well with landowners.

A spokesperson from 19 Wing Public Affairs told the paper that they’re actively engaged to resolve the issue “as quickly as possible” to meet Transport Canada regulations, and the potential impact on commercial flights was understood.

Search and Rescue and military flights will continue, though training flights will be subject to the same limits as commercial carriers.

The MyComoxValleyNow.com newsroom will reach out to 19 Wing Comox for more information on the matter.