Comox firefighters responded to 649 incidents in 2018 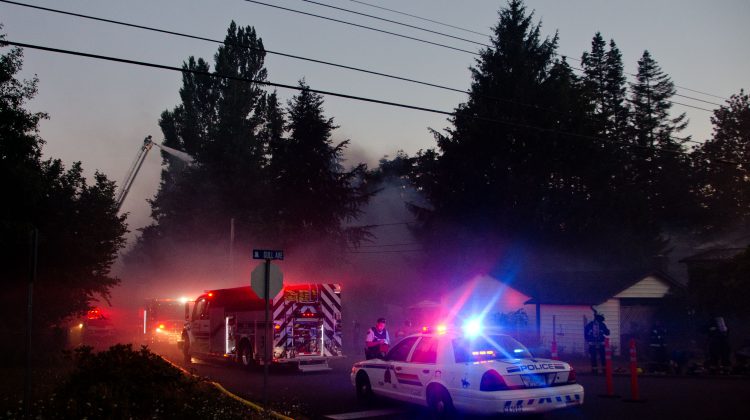 Emergency services respond to an intense fire that destroyed a home along Rodello Street in Comox on the night of Tuesday, July 24th 2018. Photo by James Wood/98.9 The Goat/Vista Radio

COMOX, B.C. – On the surface, last year was a busy one for Comox Fire Rescue.

But Fire Chief Gord Schreiner described it as a “typical year.”

“The numbers were very similar to what we’ve had in the last couple years,” Schreiner said. “We haven’t seen a lot of increase or any decrease; it’s been pretty much holding its own in the last two years.”

Over the course of 2018, Comox firefighters responded to 649 incidents, including 169 over the final four months of the year.

Roughly 60 percent of the calls in 2018 were medical incidents such as heart attacks, where Comox Fire Rescue typically send three firefighters in one small response vehicle.

The rest of the incidents were made up of a variety of fires, rescues, wires down, and vehicle accidents.

Last year, Comox Fire Rescue dealt with several structure fires, the most significant of which happened on July 24 on Rodello Street where one house was lost and several nearby properties were damaged by a fast-moving fire.

“If not for a quick response from our well-trained firefighters, we could have lost several homes (or more) during this event,” Comox Fire Chief Gord Schreiner said, in a report to the Town of Comox’s Committee of the Whole.

Also in the report, Comox Fire Rescue noted that 14 members left the department for various reasons in 2018.

As well, 62 members left and have been replaced in the past four years.

“This high turnover has put a lot of additional stress on our five full-time staff (including Chief) as we try hard to provide the required training while we are facing increasingly demanding regulations and expectations from our citizens,” the report read.

“We currently have no Work Experience Program firefighters (WEP) working with us. WEP firefighters are typically trained firefighters from other areas who volunteer to live and work at our fire station for a period of time to gain experience and training.”

The report said that the WEP program is “a great way to assist us with our overall responses (especially daytime when are numbers are often lower).”

The WEP program is limited to one firefighter at a time due to limited accommodation in Comox Fire Rescue’s station.

“Trying to maintain a solid core of volunteer firefighters is currently our number one issue,” the report said.