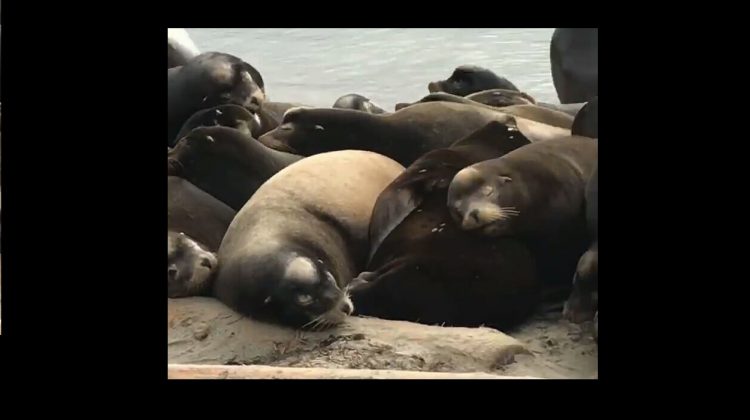 POWELL RIVER, B.C- Hundreds of sea lions in Powell River will be moving on in the near future.

That’s according to acting field supervisor Ben Rahier, with the local branch of the federal fisheries department.

The marine animals have been hanging out at Second Beach in Powell River, attracting widespread attention.

Rahier told the MyPowellRiverNow.com newsroom that the animal’s concentration in town is an unusual occurrence, with the sea lions usually following food sources and hanging around the Fraser River mouth.

In this case, Rahier believed the sea lions have been following herring, and expected the animals to move on in late February to early March to follow the herring spawn off eastern Vancouver Island.

Rahier also told the newsroom that they’ve had to post signs warning people not to feed or interact with the sea lions “in any way”.

“They can bite, and they can actually carry harmful diseases that are transferable to humans. Our primary concern is that people are keeping their distance, and not harassing the sea lions as well.”

Several complaints have also come in to the local DFO branch about people getting too close to the animals, or trying to feed them. A complaint about rocks getting thrown at the animals by youth also came in.

“We are following up with those reports, but our primary concern is ensuring that no one gets seriously hurt down there,” said Rahier.

“Anyone found harassing a marine mammal, sea lions included, interrupting their life processes or harming them, is in contravention of section seven of the marine mammal regulations,” he said.

“Violations of those regulations can result in fines of up to $100,000, so it’s important that people aren’t out there harassing marine mammals, for a variety of reasons.”