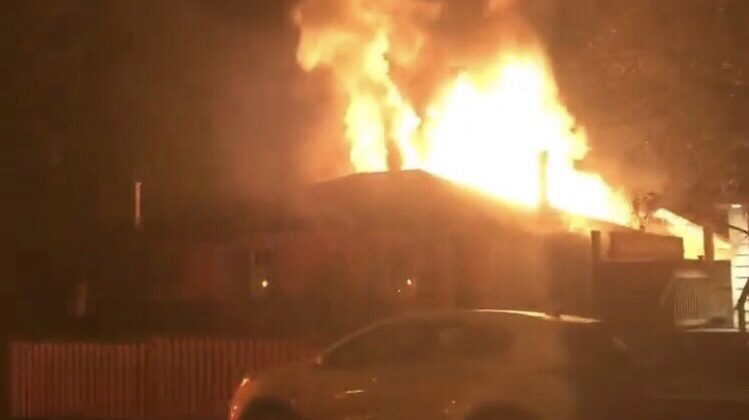 Flames lit up the night sky as the back of a home on Lewis Street caught fire at 12:30 a.m. Friday morning. Courtenay firefighters quickly extinguished the blaze. Photo courtesy Aurora Anastasia

The department was called to a residential structure fire at the 1700 block of Lewis Street at roughly 12:30 Friday morning, according to Courtenay fire chief Don Bardonnex.

When crews arrived on scene, flames were showing at the back of the home, and “quickly extended to the roof area,” Bardonnex told the MyComoxValleyNow.com newsroom.

Bardonnex said flames were shooting up “15, 20 feet above the roof when I pulled up.”

Originally, fire crews were “under the impression there was somebody in the house,” Bardonnex said.

Upon entry, crews found that the home was empty.

It took just over two minutes for firefighters to put the fire out.

All told, 27 firefighters responded to the scene.

There were no injuries, and the damage was limited to an addition at the back of the house.

“The addition was an exterior steel door, and that was closed so that stopped it from spreading it into the house,” Bardonnex said, adding that the house is still salvageable.

Bardonnex lauded the professionalism of his crews.

“It’s really awesome to see the progression they’ve gone (through) over the last few years,” he said. “The training ground that we have has just made a huge difference in their abilities.”