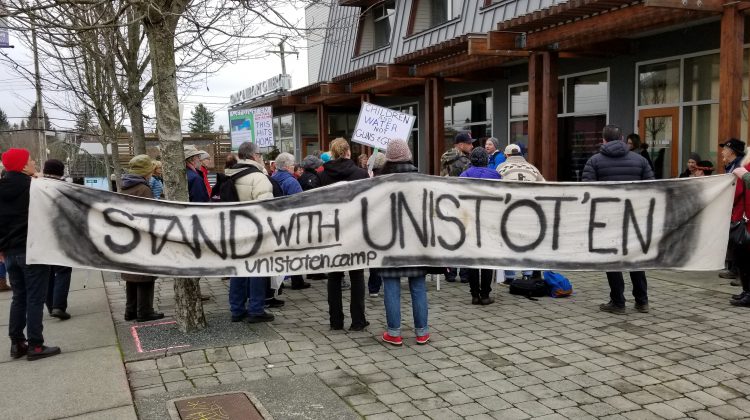 A banner of support for the Wet'suwet'en Nation during a rally in Courtenay on Jan. 26, 2019. Photo by Justin Goulet/98.9 The Goat/Vista Radio

COURTENAY, B.C. – Members of the Comox Valley community came together earlier together to support the Wet’suwet’en First Nation.

A peaceful gathering was held outside the Comox Valley Art Gallery, near the totem poles. Members of the K’ómoks First Nation (KFN) presented songs and speeches.

“We were all gathering to show our support for the Unist’ot’en camp up in the Wet’suwet’en territory up in northern British Columbia, and lend whatever support we can from members of the K’ómoks First Nation and local community members of the Comox Valley,” said Andy Everson, a member of the KFN.

Everson said one of the best things he saw was the variety of people who showed up in a display of support.

“It’s a diverse turnout,” he told MyComoxValleyNow.com on scene.

“It’s not just Indigenous people all coming out, it’s supporters from all walks of life that come out. I really appreciate that about the Comox Valley.”

Earlier this month, multiple people were arrested at the Gidimt’en campsite in Houston, B.C. The site is one of two set up by members of the Wet’suwet’en Nation.

The goal of the campsites is to prevent Coast GasLink workers from gaining access to the road near Houston, roughly 300 kilometres west of Prince George, for a pipeline project.

The road is located on Wet’suwet’en territory.

The pipeline would transport natural gas from northeast B.C. to the coast, where a liquefied natural gas (LNG) project is scheduled to be built.