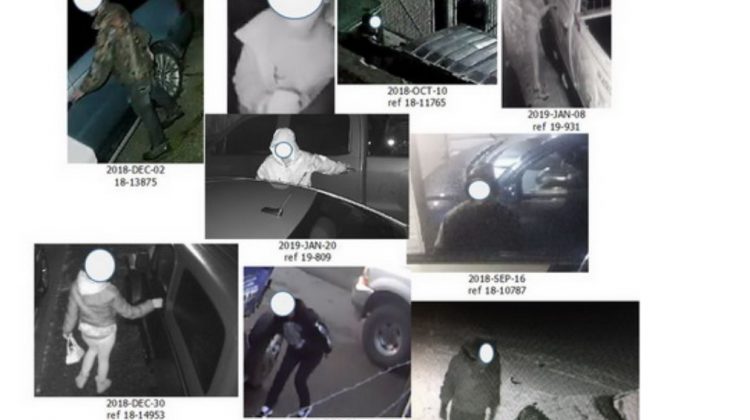 CAMPBELL RIVER, B.C- Three people have been arrested in Campbell River in connection to a recent spike in thefts from cars.

According to the Campbell River RCMP, thefts from cars saw a substantial increase in the second half of 2018. While officers made several arrests, the increase increased into early 2019. Officers received footage from home security systems on multiple occasions during the thefts, which proved critical to the identification of suspects.

They’re now thanking the public for their assistance.

Grundel is facing 17 charges, while Buller faces two related charges. Both are still in custody. Thompson is facing 14 charges, and also remains in custody.

“Since these arrests were made, Campbell River has not experienced any similar reported incidents of theft from autos,” read a statement from the detachment.

“Charges on these individuals include; possession of stolen property, possession of a stolen vehicle, fraudulent use of credit cards, mischief to property, trespass at night and obstruction. Many more charges will be laid in the coming days.”

Police are encouraging the public to report any future attempted theft from vehicles, even if things aren’t stolen, and that if anyone has security footage of an incident to report it directly, and save it for investigation.

“Doing so could ultimately prevent dozens, perhaps hundreds of additional offences from taking place and save many of your neighbours from falling victim to the same offenders,” read the statement.

“Members of the RCMP are very familiar with the local offender population and can sometimes make identifications based on distinctive items of clothing when facial features are obscured.”

Detachment spokesperson Corporal Ron Vlooswyk said that there was probably no better way to identify suspects than CCTV footage.

“For court purposes, there is often no more compelling evidence than high resolution and night capable CCTV footage depicting someone who is caught in the act of committing a crime,” said Vlooswyk.

“We want to thank the citizens who provided images from their CCTV cameras. They were instrumental in leading to these arrests and charges.”