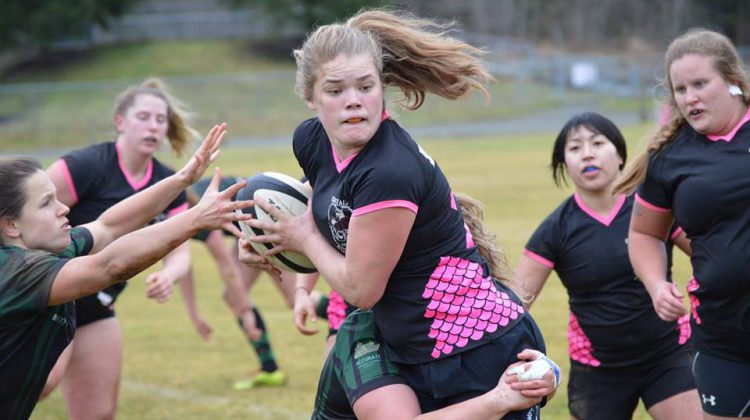 Comox Valley Kickers' Franker Keely Orrick looking to offload the ball in women's rugby action Saturday at Cumberland Village Park. The Kickers downed Cow/West, a combined side from Cowichan and Westshore by a 33-10 score to start the second half of the season off strong. Photo courtesy Jesse Ramsay

The Kickers downed Cow/West, a combined side from Cowichan and Westshore by a 33-10 score to start the second half of the season off strong.

Fittingly enough, the Kickers kicked off to start the game.

It was a very competitive contest with a lot of back and forth action.

Comox’s first try came from outside centre Daris Tendler, who managed to sprint and deke her way around the several defenders. Utilizing her speed, Tendler had a dominating game, scoring four tries in total with winger Michelle Hamilton adding a single try to the scoreboard.

“We are coming back from a two-month break and we look like a different squad. There are lots of new faces on our team for this half. I wasn’t sure how the first game back would go, but all the ladies stepped up and played hard,” said Kickers captain Natalie Nguyen.

“We made a handful of errors which resulting in penalties against us, but we were able to overcome those mistakes through our physical play. Our forwards had great set pieces; the scrums and lineouts were strong. Our backs had great chemistry and we ran our plays well. I am excited to see how the team continues to improve and grow. This was a great start to the season.”

The women’s team has a bye next week.

The Kickers men’s team will host the UVic Saxons in their season opener this Saturday, Feb. 2.

Kickoff is at 1:00 p.m. at Cumberland Village Park.

Both teams are still recruiting players for the season. No experience is necessary. The teams practice at Cumberland Village Park on Tuesdays and Thursdays from 6:30 to 8:00 p.m.