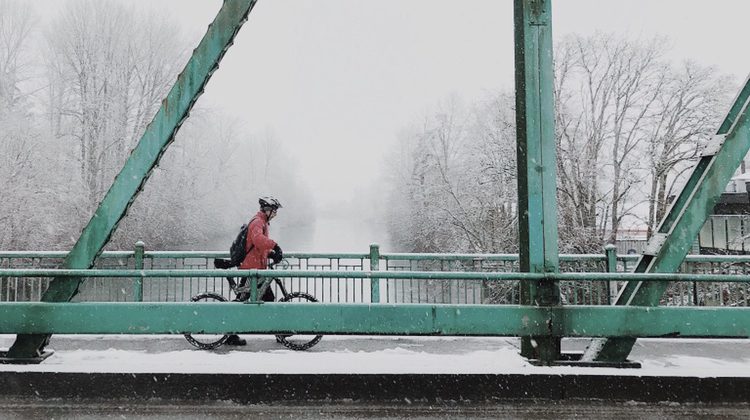 A cyclist crosses the 5th Street Bridge during a snowfall in Courtenay on January 8th, 2019. Photo by James Wood/98.9 The Goat/Vista Radio

NORTHERN VANCOUVER ISLAND, B.C. – Winter temperature is coming back to the North Island.

“In both December and January, we’re actually quite warm when you compare them to normal. In the Comox for example, it’s 1.2 degrees above normal, same with Campbell River at 1 degree,” Castellan said.

Castellan added that the cold weather will come into the coast on late Sunday.

“There’s a chance of flurries on that day… the warmer temperatures at this time of year are maximums of six and minimums of one. We’re going to see them drop down to -3 on monday and lows of -8 and -9 are possible.”

According to Castellan, Sunday night will be the coldest until Monday, with the cold trend lasting for several days.

He said the flurries will be on and off on Sunday, and that Monday and Tuesday will be clearer. But the cold temperatures mean that the flurries might stick around. He added that there is a chance of a bigger snow event on Wednesday and Thursday, but that it’s too far ahead to tell definitively.

“But what we do know is the cold is going to come. We’re going to have rain here in the next couple of days, the temperatures cool off on Sunday and that’s when we’ll see the flurries start off.”