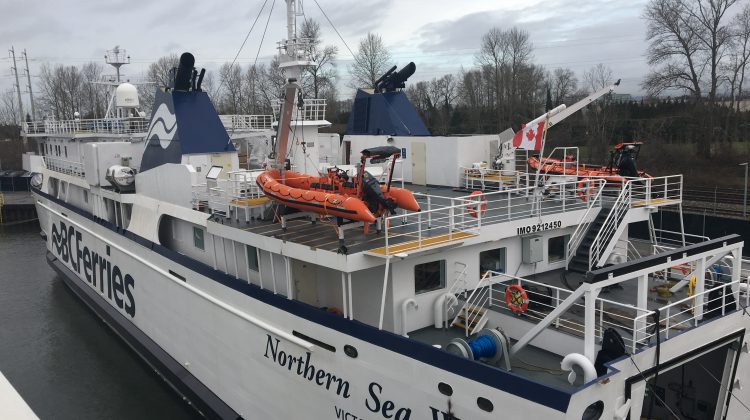 BC Ferries executive director of public affairs Deborah Marshall said construction continues on the vessel and should be completed by the end of March.

“And then we’ve got April to be doing sea trials, dock fits, crew training, transport certifications and what not, and yes, the inaugural sailing is set for June 3,” Marshall added.

The Northern Sea Wolf that will ferry passengers from Port Hardy to Bella Coola was originally set to begin direct sailings last summer.

But major delays – including more work on the ship than what was originally anticipated to bring it up to BC Ferries standards – will keep it docked until June.

“We’ve done extensive renovations to the vessel and it did take longer than originally anticipated,” Marshall said.

In mid-September, the ship moved from the Esquimalt Dry Dock in Victoria to BC Ferries’ retrofit facility in Richmond, where workers will continue the upgrades before commencing sea trials, system testing, and crew training at the end of March.

The Northern Sea Wolf has a capacity of 35 vehicles and roughly 150 passengers and according to Marshall, will be in sharp demand during the tourism season.

Once complete, the vessel will include an elevator, and a newly renovated galley, bridge, engine room, emergency generator, and passenger area.

The vessel will offer a direct seasonal service during the summertime and will serve as a connector from Bella Bella to Bella Coola in the winter months.

To accommodate the Northern Sea Wolf, BC Ferries completed $10 million worth of upgrades to the Ocean Falls, Bella Coola, Shearwater, and Bella Bella berths.