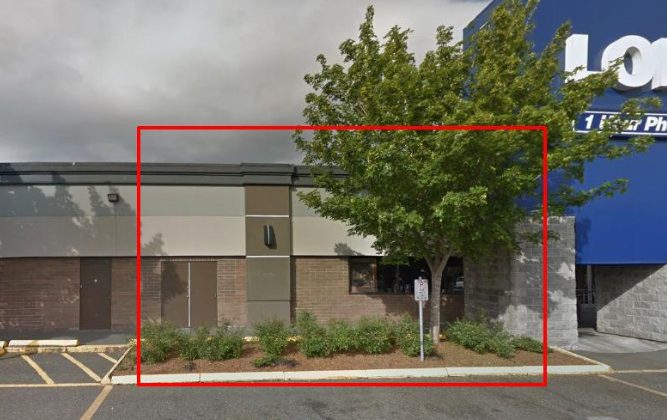 The general location of the cannabis operation at the Driftwood Mall, sourced from council documents.

They’re now looking to open up a cannabis retail outlet at the Driftwood Mall, next to the centre’s main entrance outside of London Drugs. According to staff reports from the city, the application meets all of the city’s criteria except for its distance from the playground at the Courtenay Airpark.

Those reports also indicate that the shop would not open into the interior of the mall, instead having an outer entrance along the mall’s exterior.

It would be open from 9:00 a.m. to 11 p.m., seven days a week. Two employees would be on duty at any time, with one of them being a designated person to handle security.

“All patrons will pass through the entrance door that displays alarm stickers as well as notice that they will be under video surveillance,” read the report.

“Required age restriction notice will also be displayed. In addition, the front door is visible to staff. There is no view of cannabis from outside and the display units will not have a line of sight between the cannabis and a store window. The delivery door located next to the main entrance is not accessible to the public.” 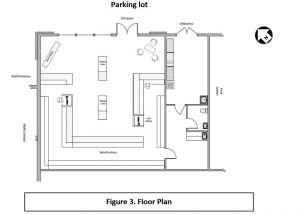 The floor plan for the shop, sourced from the council agenda.

Council appeared to be generally supportive of the application, with no major opposition raised to the business’s plan. However, they did have questions about how exactly the operation would work.

Councillor Doug Hillian noted a letter from a resident who opposed the business, which was the sole negative comment included in the council report on the application.

The resident had been concerned about the store’s close proximity to the children’s play area inside the mall, which consists of some ride-cars and a toy kiosk. According to Buck, the city’s zone of exclusion would only apply to registered city playgrounds.

Hillian also commented on the store’s location, near the London Drugs sign.

Council eventually voted to give the bylaw for the zoning change to allow the shop first reading, and set up a public hearing for the bylaw at city hall on February 19th at 5:00 p.m.

“I think this is one of the things as we move forward, a lot of the questions that came out tonight, about what are the impacts going to be about having this in that location in particular, but then how this is going to be play out in other locations around the community. I think, really, the big concerns are people going to be using the product within the six metre (no smoking area) from a doorway kind of thing, or are they going to be going home and consuming it? I think at this point, because it’s unproven (how that’ll work), it’s uncharted territory. That’s where a lot of the concern comes from.”

He also commented on whether or not he thought the location would be a good one.

“I think it will certainly be a spot that is high traffic,” said Wells.

“As a business owner, that is certainly one of the things you’re looking for. I think one of the councillors alluded to the fact that it’s right next to a sign that says “drugs”, which is kind of humorous. There’s already a liquor store in that mall, and I don’t think that liquor store has necessarily increased any issues. My expectation going forward, is that it’s probably not going to.”

As for concerns about the impact of a cannabis retail operation coming to Courtenay, Wells referred back to legalization in the United States.

“I don’t think it’s had as big of an impact as people might fear it does, but like I said, the proponent will be able to speak for himself at the public hearing,” said Wells.

The application was the first referral for non-medical cannabis retail from the province that made it to the council table. The city is currently processing six rezoning applications, and has received eight provincial referrals.