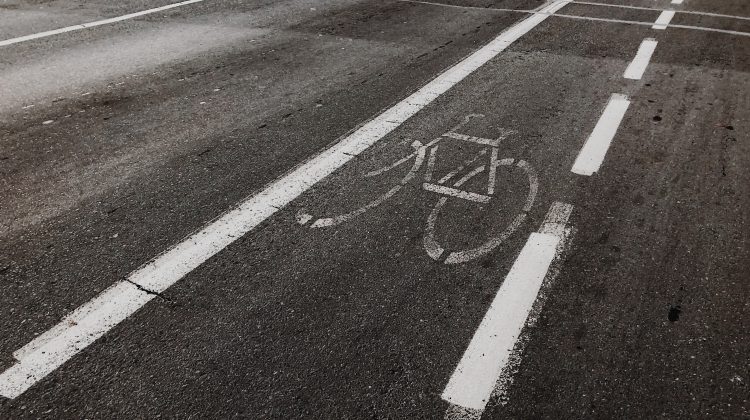 The bike lane along Fitzgerald is pictured on February 6th, 2019. Photo by James Wood/98.9 The Goat/Vista Radio

On Monday evening, a presentation came to council from the Comox Valley Cycling Coalition and city staff, looking for approval to seek grant funds to extend two sections of the city’s current bike-lane network.

The two extensions being sought were on the Fitzgerald Avenue lane, and a route in east Courtenay from Ryan Road to Hawk Drive, via Hobson Drive.

The extensions on Fitzgerald would run up to 5th Street and down to 26th Street, with a third extension running east along 19th Street to the Courtenay Riverway. Both routes are meant to act as spines to further expand Courtenay’s bike lanes in future.

The Fitzgerald expansion is expected to cost $310,000, while the Hobson route is estimated at $150,000. Grant funds from BikeBC could cover half of those costs, and just needed a green light from council for applications. 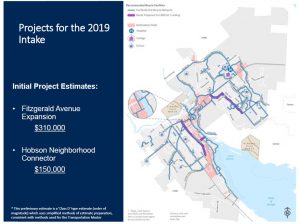 The two routes are highlighted in purple on the draft master plan for bike lanes in Courtenay.

During discussion on the matter, questions arose from council on the merits of the plan as presented, such as why a trail extension along the E and N Rail line wasn’t being looked at.

According to the response from staff, grant funding would only go towards “shovel-ready” projects that could be done without major impacts.

Councillor Melanie McCollum asked if the proposed cantilevers along the 5th Street Bridge could be a project considered for funding, and was told no.

She also raised concerns about the danger posed by car doors in the current bike lane along Fitzgerald Avenue, and was told that the routing in that existing section wouldn’t be changed. However, the new sections could be put together with that concern in mind.

Approval to seek the grant funding was eventually passed without opposition.

Speaking after the discussion, Courtenay mayor Bob Wells believed that seeking the funds was “absolutely a good idea”, saying that the city had finite resources and relied on grants for certain projects.

“I think that’s one of the things that will come out of these plans, making sure that not only are we putting our investment into places that will get the best bang for the buck, but we’re using best practices and common sense,” said Wells.

“That’s where getting public input is important.”

As for how parking could be affected in new bike lane areas, Wells said it would be obviously be a good thing to not take existing parking away.

“Again, are people going to be parking there to use that as a place to start riding? I know for my family, because we don’t live in that area, we actually drive our vehicles over to say, the Airpark so that we can cycle around there,” said Wells.

“Again, I think parking is certainly one of those things that is a necessary evil, for people to get around, and obviously to get to different parts of our community.”

The bike lane projects have not been approved to go ahead by council at this time.