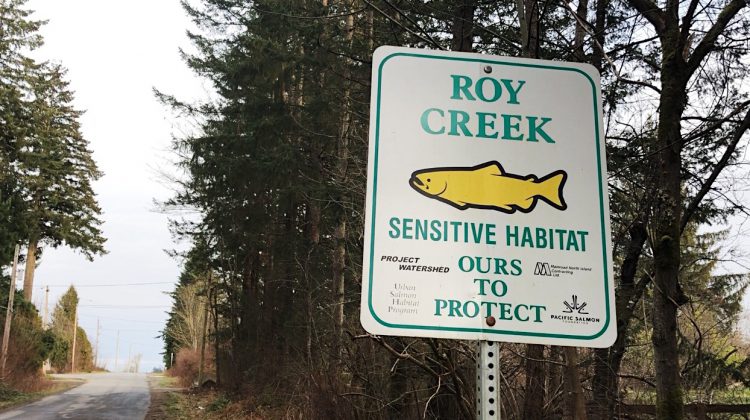 A sign along Minto Road, alerting residents to Roy Creek's presence in the area, on February 8th, 2019. Photo by James Wood/98.9 The Goat/Vista Radio

Kozakowski, who described himself to the MyComoxValleyNow.com newsroom as a concerned citizen, has been watching a drainage ditch along Minto Road since December.

The ditch runs along the north edge of a property at the corner of Ibbotson Road and Minto.

He’s been keeping an eye on it because it leads into the watershed for Roy Creek, a known salmon-bearing stream.

Silt had been making its way into that ditch from a nearby property at the east end of the road, from what Kozakowski described as a large pile of dirt piled up at the site.

After noticing the runoff from the dirt pile silting up the ditch, Kozakowski hired a testing company to look at the turbidity of the ditch. The result, according to him, was a reading above safe levels for fish within 20 metres downstream of the discharge pipes that led into the ditch. 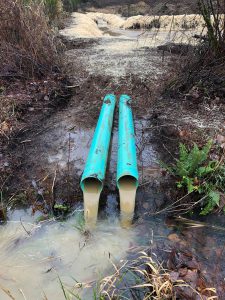 Photo of the discharge on December 9th, image supplied. 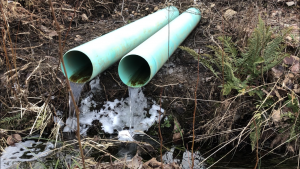 Photo of the discharge on February 7th, 2019. Photo by James Wood/98.9 The Goat/Vista Radio

After contacting provincial authourities, Kozakowski stated there had been follow-up from both them and the federal fisheries department, but no major steps have been taken to correct the runoff problem.

His frustration is apparently shared at the federal Department of Fisheries and Oceans (DFO) offices in Nanaimo.

In one email to Kozakowski, provided to the newsroom, fisheries worker Shaun Tadei expressed a wish to get an enforcement tool that the department used to have, known as an Inspector’s Direction.

The tool which would have the company or landowner who had large piles of exposed soil or possible threats of siltation “immediately contain” the potential pollutants, or face legal repercussions.

“Unfortunately, in 2011 the Conservative Government changed the fish habitat sections of the Fisheries Act removing a lot of the ability to protect and enforce fish habitat violations; Inspector’s Directions were one of the tools removed,” wrote Tadei.

“DFO now has “guidelines” for working around fish habitat and if there are projects that cause “serious harm” to fish or fish habitat it is up to DFO to prove that in our investigation”, Tadei continued, in the same email.

“We can only recommend they take measures to prevent it from happening like suggesting they hire a qualified environmental professional to assess the site and design corrective measures to limit the impact to the environment, which we have done.  Based on what we were able to see at the site once the water cleared up was not what the biologist considered serious harm, since there was very little deposition of silt on the spawning habitat. I am hoping we can work with the other agencies that are also involved to find a solution to the ongoing problem and I am still trying to get them all on the same page.   Environment Canada is now the agency involved with suspended silt in the water column until it settles out and is deposited, then it falls under DFO’s jurisdiction. I know, this doesn’t make a lick of sense. Habitat violations used to be much easier to deal with before Harper took away most of our teeth in the Fisheries Act.”

Kozakowski is frustrated with the lack of action.

“I feel that DFO should have the authourity to order, not recommend, that companies do the proper means of corrective work to solve the problem,” said Kozakowski.

Comment on the situation was sought from DFO, who answered with four written statements.

According to the statements, DFO fishery officers and Fisheries Protection Program biologists, as well as investigative staff from the federal environment ministry and the provincial Agricultural Land Commission have visited the site and surrounding areas multiple times between December 17th, 2018, and January 23rd, 2019.

They were responding to reports of sediment-laden water entering Roy Creek.

“The owner/contractor was recommended to employ and maintain erosion and sediment control measures to prevent sedimentation of downstream fish-bearing waters,” read the statement.

“DFO will assess any future observations or reports of potential serious harm associated with land development and soil deposition at this site and will determine if additional response or enforcement action is required to prevent serious harm to fish and fish habitat.”

Asked whether the department was taking any steps to get the “Inspector’s Direction” tool back, the statement indicated that it had been replaced by “Corrective Measures” in the Fisheries Act.

“Corrective Measures can direct parties responsible for carrying out works, undertakings or activities causing, or about to cause imminent serious harm to undertake measures to avoid, mitigate or correct serious harm to fish habitat,” read the statement.

The department directed residents concerned about construction-related silt runoff in fish-bearing streams to their Observe, Record, Report line at 1-800-465-4336.

As for the consequences a company could face if they’re found to be contributing to silt runoff into salmon habitat, the department stated that it was an offence under the Fisheries Act to cause “serious harm” to fish or fish habitat without authorization under the act.

“Serious harm is defined as the death of fish or any permanent alteration or destruction of fish habitat,” read the statement.

“Responsible parties can be directed to undertake measures to mitigate serious harm or restore loss of habitat.  Such offences may also carry significant penalties including potential arrest, and fines.”

As of February 7, 2019, the runoff into the ditch appeared to be quite clear. There had not been major rainfall in the previous days.

Susan Slater, the property owner, did not think the concerns about runoff from the dirt piles were valid.

“I would not do anything to harm the fisheries,” said Slater.

“We’ve got miles of ditch, before it connects to Roy Creek. What we’re trying to do is to raise the land, because it’s a swamp. They’ve peeled back the topsoil, they’re putting the fill in, and then they’ll put our topsoil back on so that we can have a viable, agricultural, producing field, instead of a swamp, with broom and alder and blackberry growing on it. That’s what we’re doing.”

She indicated that the contractor doing the work has installed settling ponds and piping to drain off the top of ponds into the ditch.

“I feel that we’ve done everything possible,” said Slater.

“It was a huge rainfall, that happened, when all this (happened), and these guys stopped work and they’ve been waiting for it all to calm down.”