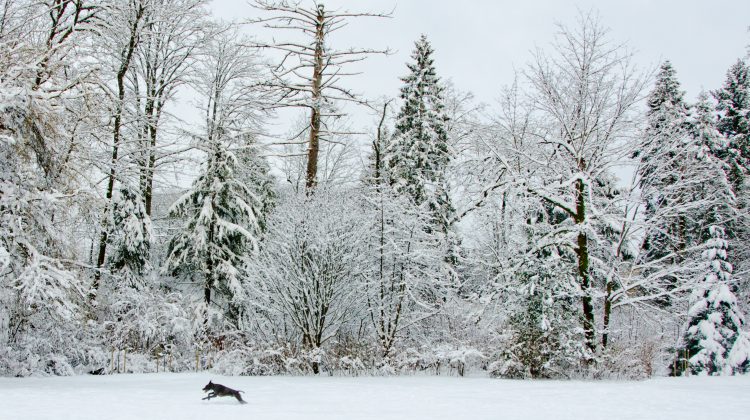 Finley, a German short-haired pointer, runs through the snow at Puntledge Park in Courtenay on February 12th, 2019. Photo by James Wood/98.9 The Goat/Vista Radio

NORTHERN VANCOUVER ISLAND, B.C. – The month is not even half done, and it’s already been a February for the ages for communities across Northeast Vancouver Island.

The Comox Valley, Campbell River, Powell River, and Port Hardy saw records or near records for snow and cold temperatures as Arctic air and a low pressure system has clung to the area since early in the month.

Environment Canada meteorologist Armel Castellan put together some numbers for the region.

Eighteen centimetres of snow fell on the city from Feb. 8 to 12, more than doubling the average amount for the entire month of February, with the crux of the storm on Sunday and Monday.

The 5.4 centimetres that fell on the valley on Feb. 10 and the 6.8 centimetres on Feb. 11 were fourth, and third place, respectively in recorded history. 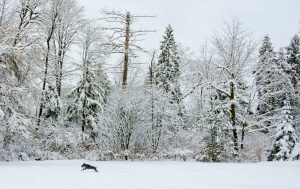 The Puntledge River runs through a snow-covered Puntledge Park in Courtenay on February 12th, 2019. Photo by James Wood/98.9 The Goat/Vista Radio

On Feb. 10, a total of nine centimetres fell on Campbell River, second behind 2009 when 23 centimetres of snow fell on the city.

The cold was also a big weather story for the city. The temperature plunged to minus-13 and minus-15.5 degrees Celsius on Feb. 10 and 11, breaking 40-year-old records for those days.

The district only saw a trace of snow, but it was extremely cold for this time of the year.

On Feb. 10, the minus-nine degrees Celsius temperature broke the previous record from 1989 by three degrees.

Since Feb. 3, the temperatures have all been in the top five for each of the days in terms of bone-chilling cold.

Castellan said relief, in terms of cold weather, is in sight. But the snow threat lingers, especially late Thursday afternoon and into the evening.

“The hardest part is when the phase changes,” he said. “So for Friday, we’re talking about rain or flurries. It’s a fairly good chance that it does switch to rain, or it’s more of a classic example of when we have enough of a push from the Pacific to really bring those freezing levels up a little bit.”

Castellan said if the rain begins to push down on the snow, it could be a messy scenario, especially near urban drains that are at risk of flooding, and for residents with flat roofs on their homes.

Rain on top of trapped snow could spell trouble, he warned.

“That is cause for concern,” he said, adding that people clearing their roofs “would be good advice.”