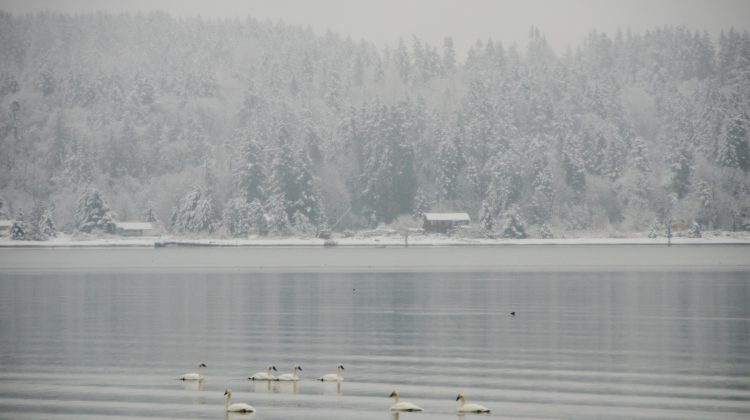 Swans swim in snowy Comox Bay on the morning of February 15th, 2019. Photo by James Wood/98.9 The Goat/Vista Radio

NORTHERN VANCOUVER ISLAND: There is relief in sight for North Island residents who are sick of all the snow that has fallen over the past two weeks.

But from mid-afternoon yesterday and into this morning, Old Man Winter had one more wallop for the Comox Valley, Campbell River, and Powell River.

Wet flakes are coming down but the trend is shifting towards a warmer but showery pattern, according to MacDonald.

“Those showers at times (will) be mixed with flurries,” he added. “There will be one or two centimetres but no significant snow expected here in the next two days.”

But by the end of the weekend, MacDonald said there will be a clearing trend with temperatures reaching three or four degrees Celsius for both Sunday and Monday.

Temperatures will continue to climb to the “four or five degree mark” as next week progresses.

“But those overnight lows will be trickling right around the freezing mark, especially with all this snow on the ground that will be gradually melting throughout the week,” MacDonald said. “There will be some slippery surfaces in the morning, so look out for those.”

The warm-up will be slow, so the snow melt will be gradual and there isn’t any heavy rainmakers in the forecast, easing the concern of flooding.

MacDonald said the “one blip” could come Tuesday with a few showers with flurries in the mix, but other than that, the snowfall threat has disappeared for now as the Arctic ridge recedes.