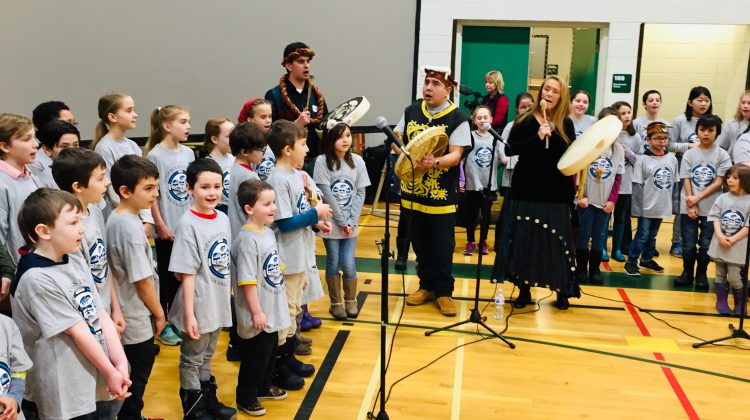 COURTENAY, B.C. – A First Nations song inspired by the beauty of the Comox Valley was celebrated during a special ceremony at GP Vanier Secondary School today.

During the event, a cultural experience was shared through the unveiling of a song commissioned by Comox Valley Schools.

Am’lala sa Kumuxse  is translated as ‘Play Song of the K’omoux,’ and speaks to the land the powerful oceans and river that are within the lands of the K’ómoks.

The song was performed in front of roughly 500 participants, including local dignitaries and educators from school districts throughout the province, and was part of the day-long cultural presentation, ‘Calling in the Circle and Sharing Our Gifts.’

The event included speaking engagements from Chief Wedlidi Speck, a member of the Namgis First Nation in Alert Bay, and head chief of the Gixsam namima (clan) of the Kwagul tribe, as well as Monique Gray Smith, an award-winning Canadian author who writes on the topic of resilience of Indigenous communities including Speaking Our Truth.

During the ceremony,  École Puntledge Park Elder in Residence David Dawson told the audience members that “we are all one.”

“It is a huge sign of unity and moving forward together in one-ness,” he said. “It is a  great honour and privilege to be doing this with these guys. It really lifts my heart up. It’s a sign that we are all moving together as one.”

Am’lala sa Kumuxse  was created in July 2018 for School District 71 Indigenous Education to be sung by all the students to celebrate Kwakwaka’wakw culture and the language.

Wadsen Jr. was present in the form of a pre-recorded video during the song unveiling

He was part of the contingent that includes the Kwakwaka’wakw dancers from the North Island who performed at the United Nations headquarters in New York City  on Feb. 1, to celebrate the International Year of Indigenous Languages.