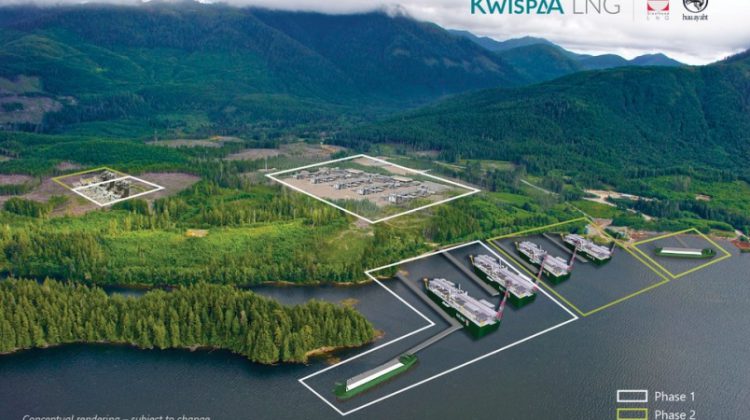 VANCOUVER, B.C- The Kwisspa LNG project is on “time out”.

That’s according to Nigel Kuzemko, the CEO of Steelhead LNG.

The company had been looking to develop a liquefied natural gas project in Sarita Bay in a co-management partnership with Huu‐ay‐aht First Nations (HFN).

On Sunday, HFN posted an open letter to their citizens, stating that they had been told by the company that the project had been put on hold.

It would have been built on a 475 hectare area owned by the First Nation, about 70 kilometers south-west of Port Alberni.

It included the construction of a pipeline to deliver natural gas from northern BC to the Huu-ay-aht territory, crossing the ocean at Powell River to the Comox Valley and heading further south.

The rough plan for the ocean crossing would have it run near an existing FortisBC transmission line.

The company had been approaching multiple local governments across the pipeline route in recent weeks, with one presentation drawing a brief protest at the Comox Valley Regional District board meeting, and another in Powell River.

On Monday, Kuzemko told the MyComoxValleyNow.com newsroom that Steelhead appreciated the support of HFN, and a “better co manager” could not have been asked for.

He also stated that progress had been made to bring the project to fruition, with agreements in Asian markets, engagement along the pipeline corridor, and the development of LNG technology which worked well in British Columbia. Elements needed to get to engineering and design were moving forward.

“However, the current political, regulatory, and geopolitical environment has created a mood of caution, among key industry participants and financial markets, and they’re requiring a higher level of certainty and de-risking, then we previously envisaged,” said Kuzemko.

“It’s clear that the macro-business environment needs to improve in order for the pipeline to be de-risked, and build confidence in the investor community.”

According to Kuzemko, the company is going to re-focus their efforts on getting First Nations and governments to partner on the project, and “resolve the uncertainty” over pipeline development in the province.

Asked if opposition along the projected pipeline route had been a factor, Kuzemko indicated that the major influence had been outside investment.

“There was no local opposition that we felt was, obviously we’re very keen to understand, it’s a very early stage, people need to understand what we’re talking about, and reactions that we saw were really just people trying to understand, the vast majority of those reactions, we thought all those were fine,” said Kuzemko.

“What we’re looking at, though, to get support for such a large project, you need support from industry, LNG customers in Asia, and you need support from people willing to invest in LNG, and invest in the pipeline. Unfortunately, when those same guys making the investment decision have different investment opportunities in the USA, in Australia, in Russia, they’ve got other opportunities and they look at those differently than they do Canada. They see that the US has a lot of political regulatory and geopolitical risk right now. Those are factors that are working against us.”

As for whether or not the company had put one facility before the other, given the planning for the terminal announced first while the pipeline followed afterwards, Kuzemko stated that doing both at the same time was beneficial.

“The reality is that the pipeline environment has gotten harder not easier, the last couple years, two or three years, so that has given us a challenge,” said Kuzemko.

“We’ve had to refocus away from the work we do on the facility, to work on the pipeline, particularly the conversations we need to have with governments and First Nations to partner with industry on the pipeline.”

He stated that if more First Nations and governments get “enthusiastic” about the project within the next 12 months, it may look more appealing to overseas investors.

“The key to this is really First Nations and government,” said Kuzemko.

“I think if they can get the project and we have all the answers to those key industry participants, and financial players, then we believe we’ll be able of attracting the capital we need to.”