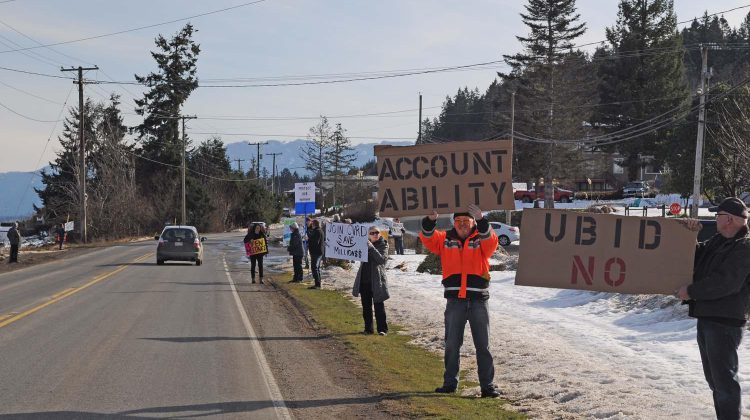 UNION BAY, B.C- Some residents of Union Bay protested outside their improvement district office on Thursday.

According to protest attendee Janet Thomas, there were several dozen people at the protest, which took place around 2 p.m.

The protestors were out to show their support for Union Bay Improvement District (UBID) trustee Susanna Kaljur, and to show their disagreement with the closure of public meetings to the public by UBID board chair Ted Haraldson.

Union Bay has been in turmoil in recent weeks, with the board roiled by disagreements. Kaljur recently got a “suspension” lifted and an apology from the rest of the board, with Haraldson later cancelling the board meetings for February and March, and declining to explain why.

Thomas said that during the protest, the UBID offices were closed, and administrator Gordon Mason was not present. No current trustees of the board came by the protest, but former trustee Jim Elliot was part of the demonstration.

There have been no indications of meetings getting re-opened to the public. The boil-water status of the district’s water system also remains unchanged.