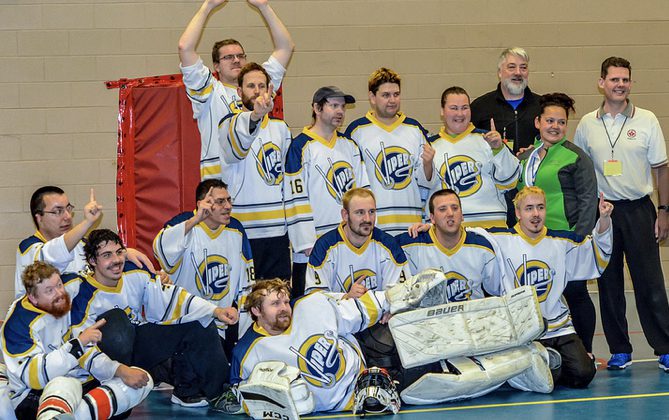 NORTHERN VANCOUVER ISLAND – It was a golden weekend for the Comox Valley Vipers.

The Special Olympics floor hockey team captured B.C. gold with a 7-1 win over Abbotsford in the provincial ‘A’ Division final on Saturday afternoon.

The Vipers dominated last weekend’s B.C. tournament in Vernon, qualifying for the title game by going undefeated in round robin action.

Head coach Randy James said he is incredibly proud of his players.

“The guys performed exceptionally well,” he said. “They definitely utilized all the things that we had taught them throughout the season to put together the wins that were necessary at the provincial games. They bonded as a team, they came together as a group and really supported each other both on the offensive and defensive side of the floor.”

Assistant coach Tarra Tipton said the team won gold at the provincials four years ago and was looking to defend that title.

That same year, the Vipers finished second and just missed out going to the world championships.

“We’re hoping to change that this coming year, get (national) gold and hopefully head off to the worlds,” she said.

Essentially the same team has played together for the past 15 years. The players also play softball together, so they know each other well.

“They’re so positive and great to travel with, too.”

The team is waiting to see if it will be selected to go to the 2020 national tournament, taking place next February in Thunder Bay, Ont.

James noted that a berth in the national championships is not a sure thing.

“We were certainly optimistic going in that we would have a chance,” James said. “There’s no guarantee once you win (the B.C. title) that you will necessarily be selected (to go to nationals) but we are certainly hopeful that we will.”

James said within Special Olympics, athletes are categorized according to their ability and in floor hockey, there were three division winners.

At the provincials, the Vipers were slotted into the top division.

And while going unbeaten, the local squad also had the stingiest defence, allowing the fewest goals among any of the teams involved in the event.

“There’s a lot of things that are certainly working in our favour, but until you actually physically receive that piece of paper from Special Olympics BC saying that you invited to go to nationals, there is nothing that is guaranteed,” James said.

Ten of the 14 players on the Vipers are from the Comox Valley. There are also four players from Powell River, and one from Nanaimo.

The team is coached by James, Tipton, and Ed Houlihan.