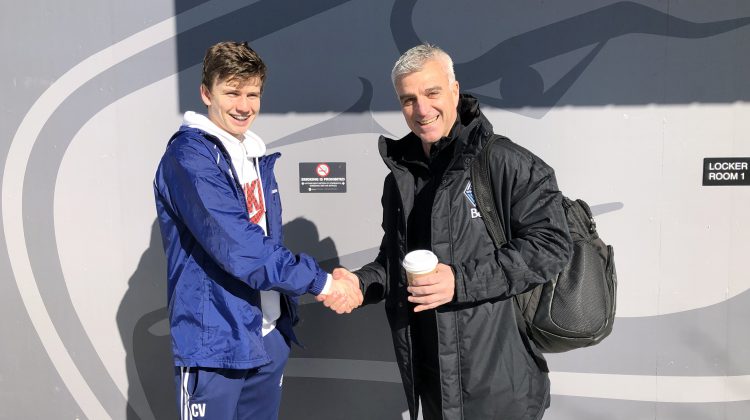 The 15-year-old striker took a circuitous route to making the program, according to his dad Adam.

“It’s not an easy process whatsoever, not even taking in context that we live in Powell River,” Adam said.

The process of getting on the academy’s radar started last January in Victoria, where Caleb was playing for his club team in the BC Premier League.

The provincial team offers the necessary exposure for the Whitecaps program.

In April, Caleb got the invite to join the U17 Academy for tryouts.

This led to last weekend, the second phase of the selection process for the new academy program. Twenty-two players were invited to a week-long camp.

Caleb was the lone B.C. player invited. The others were from Alberta and as far away as Ontario and P.E.I.

During tryouts, the players were put through their paces; that Wednesday evening, the players trying out for the program faced the B.C.’s provincial squad.

In this case, Caleb was asked to change allegiances and play for the provincial team against the players vying for a spot with the academy program.

He dominated in a 5-0 win, scoring twice and chipping in with a nice helper.
“He just had a really standout game,” Adam said.

The academy brass liked what they saw – so much so, they made a strong recommendation that Caleb join the U17 Whitecaps.

Not long after, he was offered a coveted spot with the program.

Adam said his son is a natural midfielder but anything Whitecaps-related, he’s positioned as a striker.

Caleb started playing the beautiful game at four years old and was a natural from the time he put on the cleats, according to his dad.

“He just always had a natural tendency with the ball at his feet,” Adam said.
It’s too early to say if professional soccer is in Caleb’s future.

Caleb played for the Comox Valley Riptide and from there was recommended to play Tier one soccer in the BC Premier League.

“It was at that point where it was time to sit down with him and say, ‘Okay, what do you really want out of this?’ Because this is going to take a lot of travel and a lot of effort on our part, here, so we wanted to make sure his goals were realistic, so he went into this (with) eyes wide open,” Adam said.

A possible goal is to earn a college or university scholarship to play soccer at the post-secondary level.