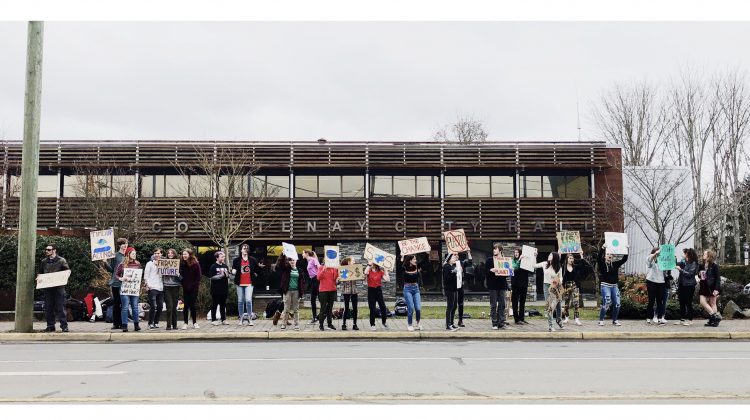 COURTENAY, B.C- Students in the Comox Valley who want to see action on climate change held a demonstration outside Courtenay city hall today.

The protest was one of many that unfolded around the world today, with more than one million students believed to have skipped school to protest inaction by adults on climate change.

The movement was reportedly inspired by 16 year old Greta Thunberg, a Swedish teenager who protested outside that county’s parliament every Friday since last August.

At least 25 students were outside Courtenay’s city hall this afternoon, shouting slogans in favour of climate action to passing motorists. Many of the drivers were honking in support.

Brooke O’Toole, a GP Vanier student, said that there had been a lot of support to the protestors, who had all skipped the second half of their school day.

“It’s mostly from the older folks, and people have been very supportive and open minded about the whole thing.”

As for criticism, O’Toole said she had heard some.

“We’ve gotten a lot of criticism in school, but I think we kind of just have to remember that the bigger picture is the planet, and we need to be the change if no one else is going to be.”

“Nobody is too small to make a change,” said O’Toole.