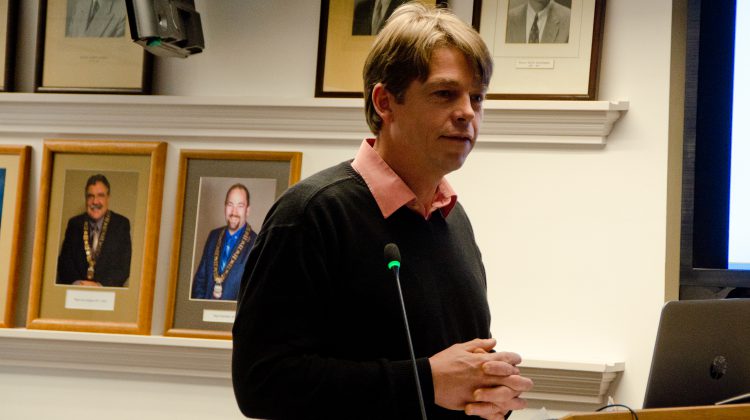 Christopher Mackenzie is pictured during his presentation to Courtenay city council on March 18th, 2019. Photo by James Wood/98.9 The Goat/Vista Radio

COURTENAY, B.C- Residents of Courtenay will get a chance to have their say on a possible water bottling ban in the near future.

Over the last few months, council has been discussing the possibility of a bylaw that would restrict water bottling, after being approached by Merville resident Bruce Gibbons.

Gibbons is the founder of a local group called the Merville Water Guardians, which got started after Gibbon’s neighbour Christopher Mackenzie attempted to bottle water at his property for sale.

That move was eventually shut down by the Comox Valley Regional District board, and at the time of the denial, Mackenzie stated he intended to look for other locations to truck and bottle his water off-site.

Mackenzie had also publicly stated that a lease hold had been found for his bottling operation in Courtenay, with an application made to the city for a business license. It remains to be seen how Courtenay’s possible regulatory moves will impact that proposal.

Since the CVRD denial, Gibbons has been approaching multiple municipal governments in the Valley asking for bans on water bottling, with Cumberland enacting a ban.

Mackenzie has been following those presentations, and spoke to Courtenay council last night before they considered their bylaw.

During his presentation, Mackenzie stated that opposition to his proposal was based on faulty science, and the aquifer he planned to draw from was being recharged in full every year.

He also said he would only be selling water within the boundaries of the CVRD, with no ability to export water outside of the province.

Asked by council about the possibility of climate change affecting the local water system, Mackenzie stated that more rain is expected on Vancouver Island in the future, as opposed to less. However, he couldn’t speak to more detailed questions about the state of the aquifer, referring those to the provincial government.

The final form of a bylaw restricting water bottling in the city hasn’t been determined yet, but part of the city staff report on the proposal recommends a restriction on imported sources, such as glacial or groundwater, while continuing to allow the treatment and bottling of municipal water.

The bylaw would also restrict the bottling of municipal water if it wasn’t supplied directly on the property where bottling was happening.

Council’s decision on Monday night was to send the issue to a public hearing, with the date and location still to be determined. According to Mayor Bob Wells, staff will find a place to house the hearing given a larger than expected turnout.

As for his thoughts on Mackenzie’s presentation, Wells said he was standing up for what he believed were his rights, and taking the argument to everyone to make sure his perspective on the matter is seen.

“We’re going to have the public hearing, at that point people are going to be able to give their perspectives on it,” said Wells.

“I think again, I think it is going to be a hot button topic so far, so I can only assume that will only continue.”