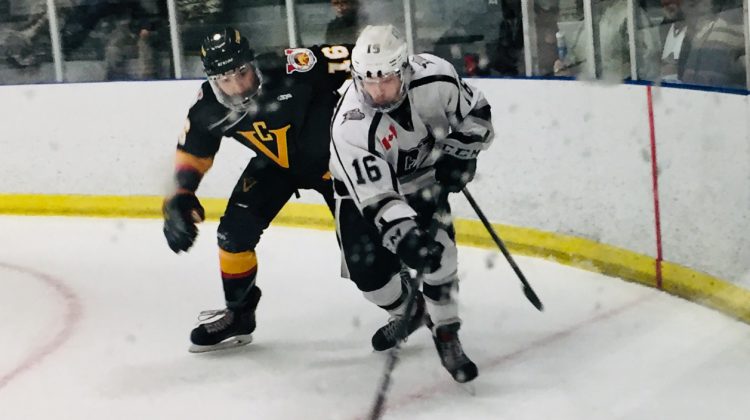 But there’s still lots of very meaningful hockey to play for both teams.

The Storm are hosting the 2019 Cyclone Taylor Cup from April 11th to 14th.

And as the hosts, the Storm get an automatic berth and will be joined by the rival Cougars, who receive entry as the VIJHL playoff champions.

But today, the Storm are stinging from last night’s series-ending, 4-2 loss to the Cougars at Rod Brind A’Mour  Arena.

Storm head coach Mike Wilson gave full credit to the Cougars, who were at the top of their game by outscoring the local boys 18-8 in the series.

“The Cougars did a really good job,” Wilson said. “Their forecheck was really good, they were really physical. Our guys worked hard but didn’t get the bounces we needed in the last couple games, there. Their goaltending was unbelievable and really did a good job backstopping them.”

The Storm showed a lot of moxie last night, battling back from a 2-0, second period deficit with goals from Damon Porter and Davis Frank in the latter half of the middle frame.

The game looked destined for overtime before the Cougars’ Matthew Clark scored a back breaker with 2:13 to go in the final frame to put the visitors ahead 3-2.

With Storm goalie Aaron de Kok on the bench for the extra attacker, the Cougars’ Mateo Albinati scored an empty net marker with 49 seconds remaining to cap the scoring.

Wilson was happy with his team’s battle level in the tightly contested, series clinching loss.

“The guys showed a lot of heart,” he said. “Obviously, an elimination game and we didn’t want to let it end. The guys battled back, tied it up. It’s amazing what some belief can do for the group. I was proud of the way we came out and played that third period but again, it was just a little bit of a bounce that went their way but they were able to put it away.”

With the VIJHL playoffs behind them, the Storm are refocusing for the Cyclone Taylor Cup provincial junior B championships.

“Obviously the guys are upset about this one and they’ve got a sour taste in their mouth, but now the mindset is that we get to see Victoria again in the Cyclone Taylor Cup,” Wilson said. “There’s still four games to play and we’ve still got a lot to play for, and I think the guys are exciting to go out and play in the Cyclone.”

This is the fifth consecutive year that the Storm have participated in the Cyclone Taylor Cup.