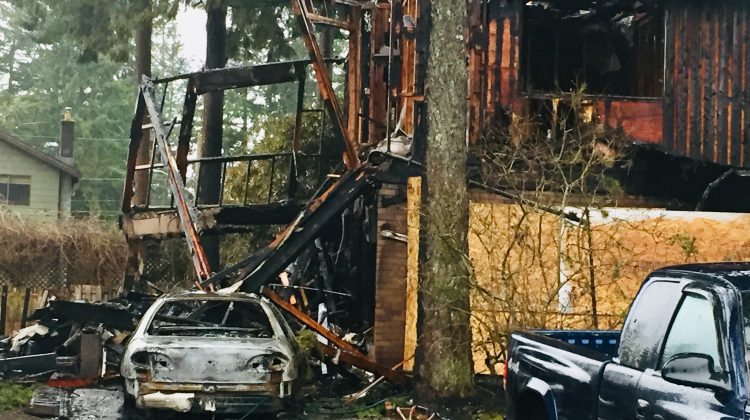 According to reports, the house was fully involved when Campbell River Fire Rescue crews arrived at Leed Rd. Photo by Troy Landreville/98.9 The Goat/Vista Radio.

CAMPBELL RIVER, B.C. – There were no injuries during last night’s house fire on Leed Road.

This is according to various media reports.

Reports said that the fire department was called to the scene around 8:12 p.m. When crews arrived, the house was already engulfed in flames. According to fire chief Thomas Doherty, fire was on all sides of the home and was starting to spread into the neighbouring property.

“The fire was also extending to the standing timber that was on the property as well,” Doherty added.

“The first crews, when they arrived, we focused efforts on protecting exposures and we were able to get into the one home and stop the fire from spreading to the attic space and the other adjoining properties surrounding it.”

Doherty added the cause of the fire is still unknown, but they are focusing their investigation around the carport area of the home.