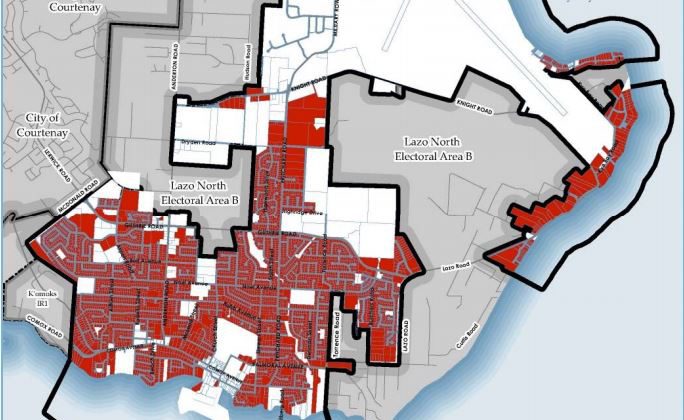 Comox development permit areas in the Town of Comox. The areas marked in red are DPA #18 secondary suites. Map created by Town of Comox

COMOX, B.C. – Comox residents had their say on Wednesday, about a proposed bylaw that will allow side-by-side secondary suites and ease zoning restrictions on coach houses.

As part of their regular meeting, town council hosted a public hearing to consider an amendment to its Official Community Plan to:

Sue Magnusson said she and a few of her neighbours already have legal secondary suites in their homes.

“However, the Comox bylaw both before and after the proposed amendment, in our view, results in unfair hardship on homeowners with suites being unable to rent both the home and the suite together or separately,” she said. “This means that, a homeowner with a suite is restricted and treated differently from other homeowners in Comox who can rent out their entire home.”

Magnusson said as her and her neighbours’ families age, other options for renting their homes and suites are being prevented under the bylaw.

“Also, our rental options might be further restricted under provincial tenancy laws because the suites are already rented,” she added. “The bylaw is inconsistent with provisions to the rentals of other entire homes in Comox. This causes us unfair hardship.”

Speaking on behalf of herself and her neighbours, Magnusson requested that council changes the bylaw to allow rentals of entire homes with a suite, both together and separately.

She said changing the bylaw in this way would ensure more rental properties are available in the Comox Valley, “where increasing residential stock is a critical priority throughout the valley and B.C.”

Solweig Williams and Vivian Vaillant  would like to see the bylaw allow for larger coach houses which would allow more storage space.

Vaillant said coach house lots in Vancouver are different than the Comox Valley.

“I just urge you (to) look at it and say, ‘Could I live in this? Could I house my mother in this?’ And let that be kind of where you look at things,” Vaillant told council.

“I am opposed to the blanket change proposed in this case for a couple of reasons,” she wrote. “Firstly, many of the lots in the zoning areas proposed are frankly too small to accommodate either secondary suites and particularly coach houses.”

Moore added, “The proposed change(s) means that these decisions that have significant impacts on neighbourhoods will be one offs made by developers and builders who are driven solely by profit NOT by those who live in Comox and pay taxes.”

Joanne Abbott spoke in opposition of the bylaw.

“We put all our money into our retirement home, and as you drive around, some of these neighhourhoods have been taken over and their front yards are paved, and they have suites, and I think some of them are renting all their rooms, because there’s like, six cars in the driveway,” Abbott said.

The proposed bylaws have received first and second readings, but have not passed third reading or been adopted by council.