Courtenay council moving ahead with tax increases, despite Theos concerns 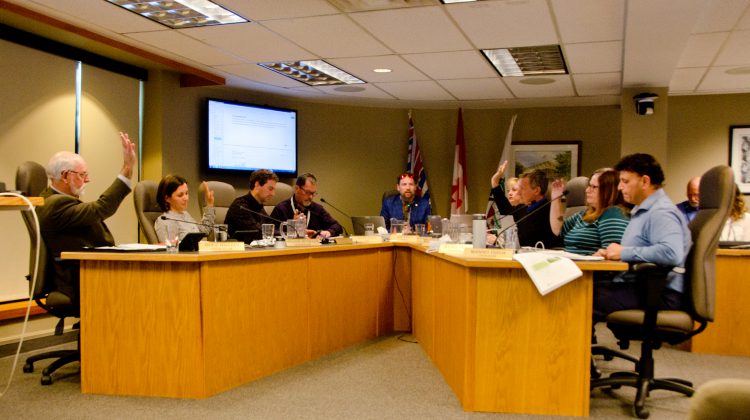 Courtenay council vote on the commercial and residential tax rate for the city on April 15th, 2019. Photo by James Wood/98.9 The Goat/Vista Radio

COURTENAY, B.C- Residents of Courtenay will be seeing an increase to their taxes this year.

Last night, Courtenay’s city council had two major financial items to discuss. The first was the city’s five-year financial plan, which currently lays out property tax increases over the next five years. The second was the planned changes to the tax rates for residential and commercial properties within the city.

According to information supplied to council, 144 new residential properties were added to the city’s tax roll this year, growing that class by 17.95 per cent. The commercial sector saw 24 new properties, with an increase of 7.66 per cent to that class.

“Council’s decision with respect to the commercial multiplier is the key factor when determining the distribution of the property tax levy between property classes,” read part of the council agenda. 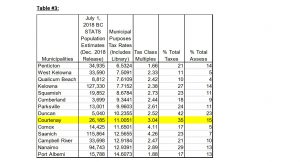 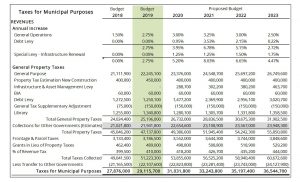 The five-year plan for Courtenay’s taxes, as laid out this year.

Both of these topics have been causing considerable concern for councillor Manno Theos, who spoke at length about his views on the matter on Monday evening.

He opposed the passing of the five-year plan, citing the possible strain on the community from high taxes, and believed that the proposed multiplier for commercial properties could scare off potential new businesses coming to the city. 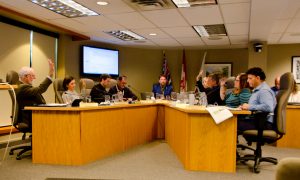 Courtenay council vote on the commercial and residential tax rate for the city on April 15th, 2019. Photo by James Wood/98.9 The Goat/Vista Radio 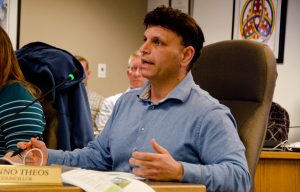 During discussion of the multiplier rate, Theos mentioned actions taken by previous council that had lowered that rate and helped local business in the process.

He stated that Courtenay had one of the highest commercial multipliers in the province, which he described as a “reputation you didn’t want to have”, and said he would be troubled to support the decision.

He eventually made a motion asking for the commercial multiplier to stay the same as last year, which failed to find a seconder.

After the motion failed, Courtenay mayor Bob Wells said there was merit to encouraging businesses, and councillor David Frisch stated his belief that lowering the commercial multiplier didn’t necessarily mean more business would come to the city. Frisch believed the move was fair.

The change to the tax rates was then approved, with Theos opposed. He also opposed the approval of the five year plan, which took place later in the meeting.

The MyComoxValleyNow.com newsroom spoke with Wells on both items after the meeting. Last week, Wells had indicated a desire to see the commercial multiplier go down, in response to a report from the CFIB that took issue with Courtenay’s commercial taxes.

“It has gone up slightly,” said Wells, after the meeting.

“When we look at how other municipalities have dealt with, based on the percentage of taxation coming from commercial entities, when we look at ourselves compared to Comox, we were actually lower. Here, there was that will of council to want to equalize things out.”

He also responded to the concerns of Theos about scaring off businesses.

“Obviously, there is some validity to it,” said Wells.

“When I spoke to it today, I have to say as a business owner, I didn’t move here and start a business because of a multiplier, I didn’t do it because of a CFIB report, I did it because I love the Comox Valley, I love Courtenay, and I would pay extra to be here. I understand that we don’t want people paying extra, just for the sake of paying extra, but there has been a long period of time when big infrastructure projects have just been pushed off the side of the table, and as a council, this round we actually want to contemplate those things.”

Wells also discussed the five-year plan. According to him, the future property tax rates are forecasts, and “absolutely not” set in stone.

The city’s full five-year plan can be found here: https://www.courtenay.ca/EN/main/departments/financial-services/financial-plan.html