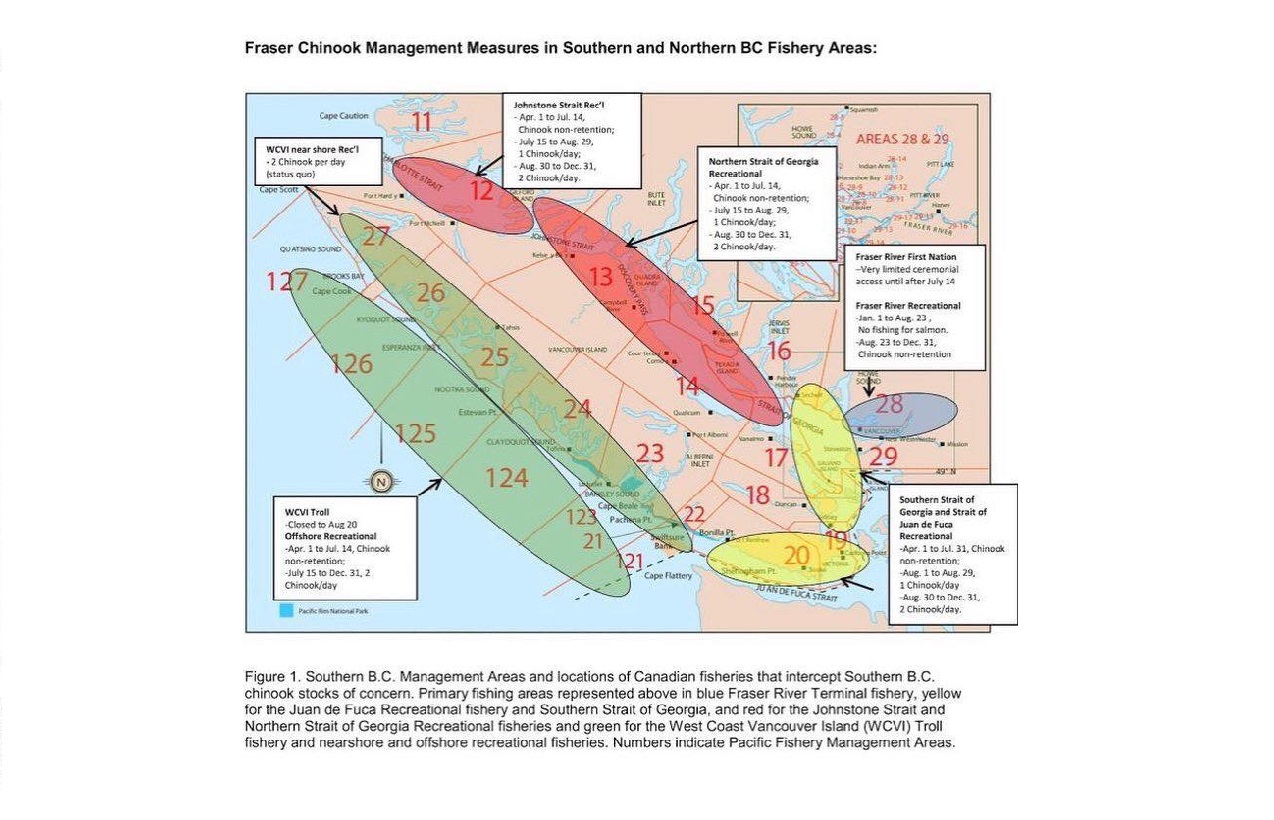 VANCOUVER ISLAND, B.C. – The Department of Fisheries and Oceans has taken steps that will have a major impact on the Chinook salmon fishing industry.

The DFO said in an April 16th announcement that Fisheries management measures for 2019 “will support the recovery of at risk Fraser River Chinook populations (while) protecting the jobs and communities that depend on Chinook survival.”

These measures were developed from consultation with Indigenous communities, recreational and commercial fishing organizations, and environmental organizations.

The DFO said the measures “are one component of a larger strategy intended to place at risk Pacific salmon populations on a path towards sustainability.”

Commercial troll fisheries for Chinook will be closed until Aug. 20 in Northern BC, and Aug. 1 on the West Coast of Vancouver Island to avoid impacting Fraser Chinook stocks and to support conservation priorities.

West Coast Vancouver Island inshore waters will remain at two Chinook per day for the season once at-risk Chinook stocks have passed through, to support the long term viability of the salmon and of the recreational fishery.

•    Fraser River recreational fisheries will remain closed to salmon fishing until at least August 23, and opportunities will be informed by any other conservation issues (coho, steelhead, etc).
•    Retention of two two Chinook per day continues to be permitted in Northern B.C. and inshore areas of the West Coast of Vancouver Island.

Other opportunities may be identified and announced in season where abundance permits.
•    An overall reduction in the total annual limit for Chinook that can be retained per person in a season from 30 fish to 10. Recreational fisheries for other species will continue.

In a release, the DFO said these new measures are difficult, but they are necessary to address Fraser River Chinook decline.

According to the release, “a continued decline would irrevocably harm species that depend on the survival of Chinook salmon, such as the Southern Resident killer whale. In addition, it would permanently affect the culture, heritage and livelihoods of Indigenous communities and permanently eliminate many jobs in the recreational and commercial fishing industries.”

The DFO says assessments of Chinook salmon from the Fraser River system have found Chinook are in danger of disappearing from Canada.

“Chinook salmon populations have been in decline for years as a result of a number of factors including habitat destruction, harvest, and the effects of climate change,” it says in the release.

“Of the 13 wild Fraser River Chinook salmon populations assessed, only one is not at risk. The science is clear. The loss of these Chinook populations would be disastrous not just for wildlife that depend on them as a food source, but also for the many BC communities whose jobs and ways of life depend on Chinook salmon.”