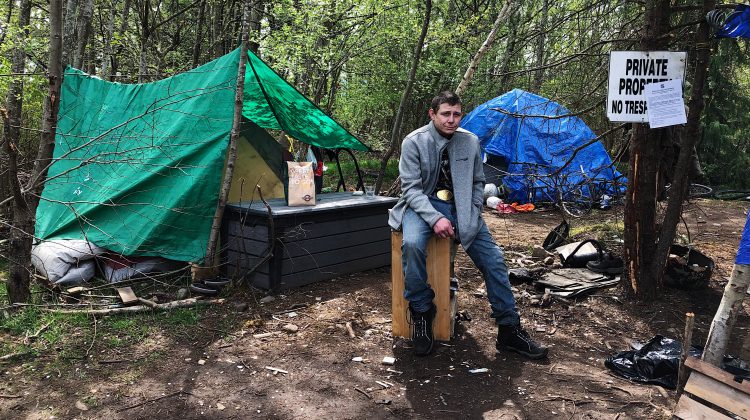 John Kevin Finney, a homeless resident of the Comox Valley, is pictured at the campsite behind the pump station along Comox Road in Courtenay. Photo by James Wood/98.9 The Goat/Vista Radio

COURTENAY, B.C- Evictions at the homeless camp behind the pump station along Comox Road didn’t come as a surprise.

That’s according to John Kevin Finney, a homeless resident of the Valley who has been living at the site for the last few months.

According to the City of Courtenay, eviction is being ordered at the site due to “significant safety concerns” expressed by the Comox Valley RCMP and others. Those concerns stemmed from the number of people at the site, and increasingly hazardous conditions, as well as reports of criminal activity.

The Comox Valley Coalition to End Homelessness is involved with outreach activities to support the residents leaving the camp.

According to the city, any sleeping or camping equipment and associated effects still on the site after 3:30 p.m. on Monday will be removed by the city contractor on Tuesday.

The MyComoxValleyNow.com newsroom spoke with Finney on Thursday afternoon. He indicated that he had been one of the first people to camp at the site, though they were initially closer to the river and out of view.

After the ground flooded, campers were forced to move up closer to the pump station, visible from Comox Road. After some of them didn’t move back into the wooded area, others saw the camp, and it began to grow, with a spike in the last two weeks.

He now believes there are roughly 20 people at the pump station camp.

“It’s hard to take care of your garbage when you don’t have anywhere to put it. It’s illegal for me to dump garbage, anywhere. Logistically, it’s hard to pack out of here. Other than that, they’ve been great. They’ve come in, done cleanups, and they’re really understanding. I’m sure once that mess up there was in the public’s eye, it was kind of a matter of time.”

Asked about fire calls to the area, he only knew of one, which was his own tent burning down. As for criminal activity at the site, he said he didn’t know about it, and doesn’t participate. As a whole, he believed the camp had been “relaxed”.

“For the most part, yeah,” said Finney.

“Obviously there’s drug activity and whatnot, but that always goes pretty much hand in hand, with our situation.”

He had expected an eviction to come at some point from the city, and touched on the recently-opened supportive housing complex in west Courtenay, the Junction.

“Not one of us that I know of got in, over here, because we were as far as I’m concerned, we’re out of the public eye,” said Finney.

“Everybody that was camping downtown last winter, and they all got hotel rooms, ended up in this affordable housing, and we’re still out here, and we’ve got nowhere to go. We’ve got to leave here.”

He stated that he had had an application in for the facility, and has been told to phone BC Housing in Victoria every day.

“There’s no phones hanging in the tree’s out here. Apparently, you’re supposed to phone in every day, and hope somebody gets kicked out so that you can take their spot. It works like a homeless shelter.”

He said he has to leave the site by tomorrow. He also didn’t anticipate much of a resistance to the clearing of the site, though some residents may be upset.

As for what he would say to the Valley as a whole, he apologized for the mess.

“Trust me, if it was all up to me, it would be cleaner,” said Finney.

“Some more affordable housing would be great, I don’t like being on the system, but unfortunately, I have some issues with life.”