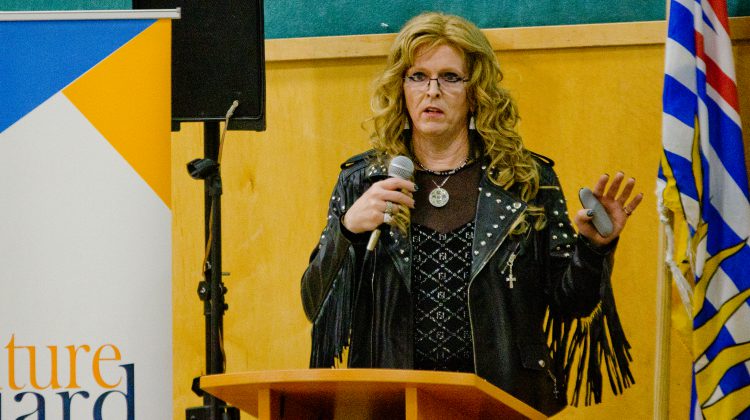 Jenn Smith speaking during an anti-SOGI rally in Campbell River on April 28th, 2018. Photo by James Wood/98.9 The Goat/Vista Radio

CAMPBELL RIVER, BC – A prominent anti-SOGI advocate and political critic is coming to Campbell River on Sunday.

And the City of Campbell River’s staff said they are aware of residents’ concerns about the event.

Jenn Smith will be giving a talk entitled “The Erosion of Freedom: How Transgender Politics in School and Society is Undermining Our Freedom and Harming Women and Children.”

Smith has previously visited Campbell River for an anti-SOGI rally in 2018.

The Sportsplex was rented for the event by a Campbell River resident who has ties to the Canadian Christian Lobby.

Sunday night’s talk will be an information session, according to its Facebook event page.

Smith is known to speak against SOGI 123 and sex education in schools, citing that current resources are “brainwashing” students and are destroying parental rights.

The city says it is not hosting or endorsing the event and have said in an emailed statement that the city has a policy and a facility code of conduct that ensures safe and respectful behaviour at city facilities.

“The Charter (of Rights and Freedoms) also protects freedom of speech, and when the Sportsplex was booked for this event, we understood this was to be an information session,” the city’s clerk Elle Brovold wrote in the email.

Ron Bowles, the city’s general manager of community development, said that if an event at a city facility is deemed unsafe, the city staff will act accordingly.

“I can’t say that that action would be. It could be anything from asking people to change their behaviour, remove them from the facility or it could even go as far as calling the RCMP,” Bowles said.

“We have a protocol and procedures we follow depending on the situation.”