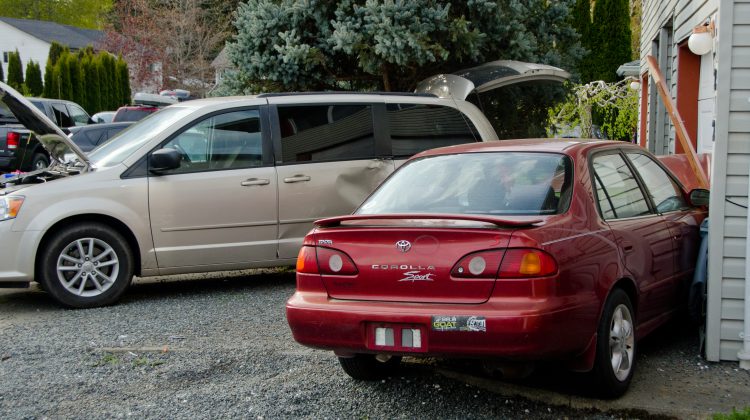 Two vehicles pushed into a home along Joshua Place in west-end Courtenay on April 16th, 2019. Photo by James Wood/98.9 The Goat/Vista Radio

COURTENAY, B.C- The man arrested after a chaotic scene in west-end Courtenay could be facing charges in the near future.

According to multiple eyewitnesses, just before 5:30 p.m. on Friday, a man in the area close to the intersection of Joshua Place and 13th Street got into an altercation with his partner.

After that altercation, he got into a vehicle and drove at high speed into at least two parked vehicles at a home nearby, with one hitting the structure.

After that crash, he drove at high speeds towards 13th Street, striking a third vehicle on the road.

He then ended up driving into a house at the corner of 13th Street and Larsen Road.

The driver then exited the vehicle, and ended up in another altercation with at least two men who were trying to restrain him.

He eventually was taken into police custody.

According to an update from the Comox Valley RCMP, investigators are still gathering evidence in their investigation. Charges are expected in the coming weeks.

The man’s identity has not been released.