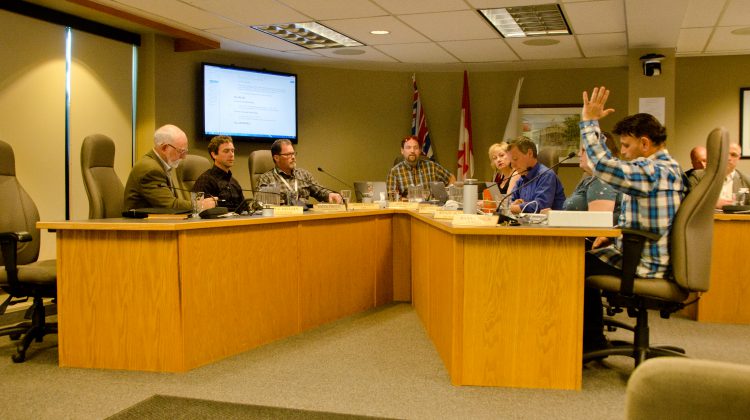 Councillor Manno Theos votes against approval of the city's property tax rate for 2019 on April 30th, 2019. Photo by James Wood/98.9 The Goat/Vista Radio

COURTENAY, B.C- A property tax increase of 2.75 per cent is all but approved for Courtenay residents.

On Monday, Courtenay’s city council passed the tax increase and their five-year financial plan through third reading, with final approval coming in the near future.

While council has been set on this path for the last few meetings, Councillor Manno Theos has been vocally opposing the rising tax rate throughout the entirety of the budget process. That opposition was back on display on Monday afternoon.

According to the city’s financial plan for the next five years, property taxes are forecast to go up. This year’s increase is set at 2.75 per cent, with 2020 going up by 5.20 per cent.

Theos is worried about residents of the city getting overburdened by those forecast increases, mentioning feedback from the public and other costs such as fuel and power bills.

“People are falling behind,” said Theos, at the Monday meeting.

“We’re a huge part of that equation. Mortgages to many people are not the number one expense in their costs now, it’s property taxes, and we need to put the rein on that as much as we can, whenever we can. It’s getting to the point where we are contributing to the homelessness by making these kinds of decisions. I’m going to be very interested in hearing what is the capacity that people are willing to pay.”

He then brought up the problem of the work needed for the 5th Street Bridge, stating a belief that the re-coating of the bridge would be “cosmetic” and questioning whether it was a need or a want.

“The painting is not just cosmetic,” said Allen.

“It results in a cosmetic impact, I guess you could say, visually, but it actually adds life to the bridge. My recollection, is when the work is done, we’re looking at another 50 years, possibly, going into that bridge.”

He went on to mention that costs of the bridge work could be different, depending on whether or not council would want to add cantilevered bike lanes, which would be a significant cost. However, they “may not happen”, with Allen going on to mention discussions about a possible 6th Street pedestrian bridge.

Those decisions would likely turn on master plans being developed by the city for transport and recreation.

Courtenay mayor Bob Wells also responded to Theos, stating that everyone at the council table had “wrestled” with how to keep taxes from rising.

“What we need is solutions,” said Wells.

“To say that people can’t pay it, is basically stating the obvious. We all know that we want to keep the taxes low. What we’re looking for is solutions around the table to keep it low.”

He brought up a proposition from councillors Doug Hillian and Melanie McCollum to use gaming funds to reduce this year’s tax increase from 3.75 to 2.75 per cent.

“When you say that people want lower taxes, when I look at you councillor Theos, I want the solution to that as well, not just a comment that it should be lower taxes, because I think we all would agree that that is something that we want to have,” said Wells.

“If you want to add a solution, that would be great.”

In his response to the mayor, Theos brought up staffing levels and costs, which has been a recurring topic for Courtenay’s municipal government. Citing a conversation he had had with a teacher, he mentioned the possibility of “efficiency experts” coming in and looking at ways to combine departments to find savings.

That idea didn’t find much reception around the council table.

“We can’t count our eggs before they hatch, because if we have an efficiency expert come in, they may actually find that we’re understaffed,” said Wells, while responding to Theos.

“To assume that we’re overstaffed, I’d rather say that we don’t know and we’d like to get that data so we can make decisions based on that, rather than assume that we are fully overstaffed.”

Theos responded by saying that was possible. He also believed the city should look at more sponsorship of city functions.

As conversation progressed, Hillian eventually spoke about whether or not the city actually knew the “full situation” of how people were impacted by property tax increases.

“It boils down to do we want to provide the services that a modern city and the residents that live in it expect to have available to them, and how are we going to raise the revenue to do that?” said Hillian.

“The issue of the staff, and the cost of running the city, came up during the last council.”

Hillian stated that the last council had voted by majority to go with current staffing levels and related costs. Bringing up the recent municipal election, he said there had been a “significant slate” run based on lowering taxes and cutting services, and the community instead returned people “by a significant margin” who felt otherwise.

“I don’t see the tax revolt out there that some have spoken about,” said Hillian.

“Nobody likes paying higher taxes. But everybody wants, when they turn on their tap, the water to run, when they call the police for someone to respond, when they go to the recreation centre or the planning department to get staff that will handle the things they’re seeking. So, those are the choices that I see us being faced with.”

Councillor Wendy Morin agreed with Hillian, and mentioned that she hoped a planned select committee on sourcing city revenue could help find solutions.

After that round of discussion, Theos spoke again about his concerns, stating that he had seen people’s ability to pay their taxes go down, and described worries about people on fixed incomes.

“That’s why I brought it up, that’s why I keep bringing it up,” said Theos.

“I don’t want to be a thorn, but I just want to express what I see, what I have seen at the doors a number of times. If I don’t, I just don’t think I’m doing my duties.”

Wells responded again, saying that those sentiments were echoed by all of council, but the postponement of projects like the bridge makes costs go up.

“Had they been done, five or ten years ago, when they should have been, the cost of doing them would have been significantly less,” said Wells.

The discussion ended with a pair of votes on this year’s property tax rates and the five-year financial plan. Both were passed, and both were opposed by Theos.

Final approval is coming in the near future.