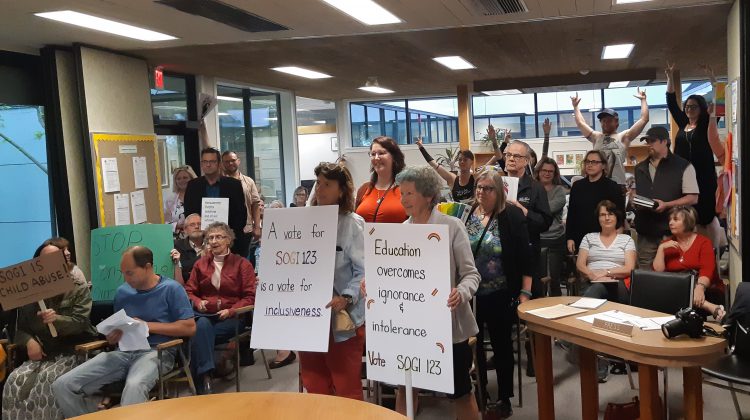 A large group of concerned citizens, both in favour of and opposed to SOGI 123, at the May 8th SD72 board meeting. McCay, in blue, is seen at the left hand side.

CAMPBELL RIVER, B.C- The school system in Campbell River won’t be seeing any changes to how it handles SOGI 123.

That’s the word from Jeremy Morrow, the superintendent for School District 72.

Morrow was responding to an inquiry from the MyCampbellRiverNow.com newsroom, following a presentation last Sunday evening by Jenn Smith. Smith is a highly visible speaker for people opposed to SOGI 123, an LGBTQ education resource used in British Columbia’s public school system.

During Smith’s event, local activist Christian Michael McCay discussed working “behind the scenes” with the school district on SOGI.

McCay has been vocal in his opposition of the resource in the past, and has been touring with Smith in recent days to speaking engagements in different communities throughout the province.

On Friday, Morrow confirmed that he had met with McCay four times over the past six months to hear his concerns regarding SOGI 123.

According to a statement from Morrow supplied by the school district, McCay’s concerns in those meetings have been, and continue to be, consistent with the concerns he has expressed at public schoolboard meetings in the past.

“The district is always primarily committed to hearing the concerns of parents of children within our system, as well as interested community members and we do factor feedback into our decision-making, when and where it is appropriate and within reason,” read Morrow’s statement.

“Over the last six months, the district has also heard many messages of support for SOGI 123 from current SD72 parents, students, teachers, principals and community members. There has been no change to the commitment on the part of the district, myself, or the Board of Education in creating inclusive and respectful learning environments for all students, regardless of race, sexual orientation, gender identity and faith.”

McCay declined to discuss the matter with the MyCampbellRiverNow.com newsroom on Monday.