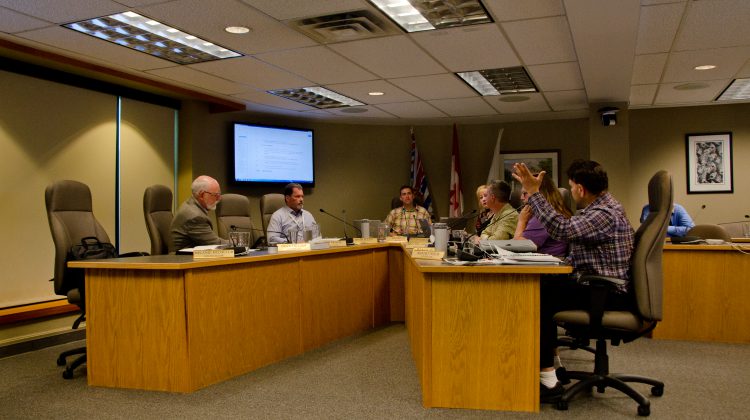 Councillor Manno Theos votes against approval of the planned 2019 tax raise in Courtenay on May 6th, 2019. Photo by James Wood/98.9 The Goat/Vista Radio

Councillor Manno Theos has been vocally opposing the rising tax rate and tax forecasts throughout the entirety of the budget process, and that opposition was on display once more on Monday.

However, Theos planned on more than repeating himself for a second week in a row.

In response to a challenge from Mayor Bob Wells for solutions on finding revenue, instead of commenting on how tax increases were unpleasant, Theos used his speaking time at the council table to lay out a number of ideas he hoped could bring in more money for city coffers.

He started by raising the idea of a “high tech park” in Courtenay, which could bring in technology-based businesses to locate in the city. His examples of those businesses included video game developers and call centres, and he believed the nearby airport and “natural assets” of the area would be a draw.

Theos’ listing of his ideas was stopped momentarily by acting mayor David Frisch, who questioned the timing of the idea-raising given how far along the city was in approving it’s budget.

He told Theos that he was repeating the same points he raised whenever the budget was being discussed, and that it would be better to bring up the ideas he had at a different time, with a planned select committee for revenue-sourcing being a better venue.

That select committee was pushed for by Councillor Doug Hillian, who also spoke in response to the concerns from Theos.

While saying he would vote in favour of the budget and property tax increase, out of a belief that holding the line on taxes would mean a decrease in city services, Hillian raised the city’s spending on the Comox Valley Economic Development agency as a place to possibly cut back.

Councillor Wendy Morin also spoke, saying she liked Hillian’s idea of a select committee to find ways to get more revenue in.

Eventually, Frisch told Theos that the venue for ideas on how the city can get more revenue would be that select committee, and what he was bringing up couldn’t be done “at the 11th hour”.

In response, Theos told council and Frisch that he had taken Wells’ challenge seriously, and by speaking he hoped to change minds.

Council then allowed him more time to lay out his ideas.

The full list included energy audits of public buildings by Honeywell, more aggressive pursuit of any and all grant funding from other levels of government, the installation of donation boxes in the downtown core for anyone wishing to contribute to city supports of social programs for homeless residents of the Valley, more corporate sponsorship of public facilities, such as garbage cans, and changes in how the city manages it’s vehicle fleet.

He also brought up the idea of using an “efficiency expert” to review city operations, the lobbying of the provincial government to give city governments a chunk of the provincial services tax, and the permission of video lottery terminals in the local food industry.

After that address to council, a vote was held for final approval of the tax raise for this year and the five-year forecast of raises. It passed, with Theos opposing both times.

Asked after the meeting why he chose to bring these ideas up at that particular time and not before, Theos mentioned the challenge from Wells as the reason.

He also mentioned feedback from the public, who he said are concerned about future tax increases.

“They (the people he’s talked to) are intimidated by a potential 30 per cent increase over the next five years,” said Theos.

“People that are on fixed incomes, on minimal incomes, are just seeing that as a burden that is going to put them in a position where financially they can just not afford it.”

As for whether or not that particular meeting was the best time and place to bring up those ideas, Theos believed it was.

“The time is any opportunity we have as elected officials,” said Theos.

“If we have ideas, that can make a difference to our budget, that’s incumbent on us to bring those ideas forward. I think that before passing a final budget that is going to impact every citizen of our community, I feel that I am going to bring forward every idea I have, not only this time, but moving forward I guess it will be important that we all generate those ideas. It’s not palatable for people to be thinking they’re going to be hit with a 30 per cent increase over the next five years.”

He believed it had been productive, because staff and council got to hear his ideas.

“It’s up to them whether they feel that the ideas are valid, or important, or not,” said Theos.

“If I just say, I’m not going to speak for ten minutes on an issue that I think is critically important to every citizen of this community, then I’m just not doing my duty.”

More details on the planned select committee can be found here: https://www.mycomoxvalleynow.com/53897/hillian-aiming-to-reduce-future-tax-impact-on-courtenay-residents/