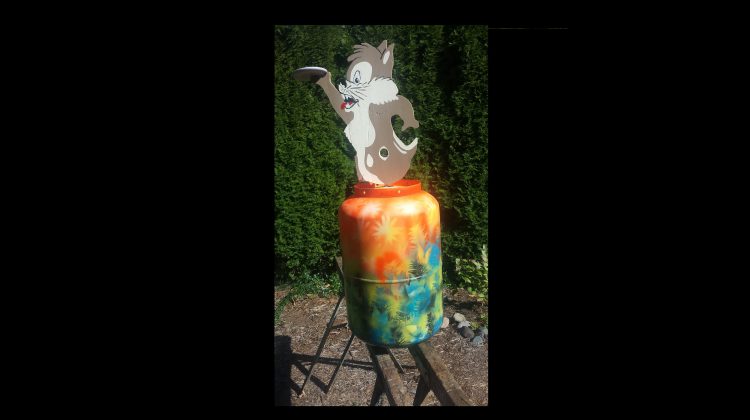 A photo of the recovered tonal goalpost.

Rey is a member of the Comox Valley Disc Golf club, and spoke to the MyComoxValleyNow.com newsroom last week about the disappearance of the club’s tonal goalposts from their course in the Stotan Falls area, on land owned by 3L Developments Inc.

One of the posts had been set up as a memorial for former course manager Mike Barrett, who passed away after a battle with cancer last September.

On Tuesday, Rey informed the newsroom about the discovery of two of the missing goalposts, one of which is pictured at the front of this story. According to Rey, they were found in a ditch along the inner road in the 3L property, well hidden. They were of a chipmunk, and a jack-o’-lantern.

He still is unsure of the exact motivation of the person or persons responsible for the thefts, though he mentioned a spike in vandalism on the 3L property in the last few weeks. He believed that it was not a disc golf player responsible.

“You can’t play alone and sooner or later someone would speak up,” said Rey.

Photos of the missing posts can be seen below.