#FindJordanHolling: resident handing out decals to keep the search going 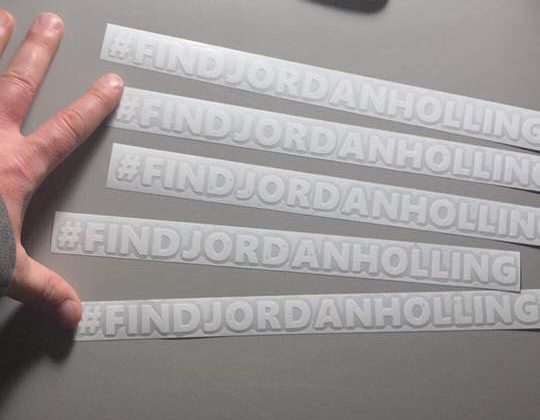 Dan Pattison is handing out free decals to keep the search for Jordan Holling alive. Photo courtesy of Dan Pattison.

CAMPBELL RIVER, BC – The posters are getting old, but the search needs to keep going.

Campbell River resident Dan Pattison wants to keep the search alive, so he made #FindJordanHolling decals for others to take.

Pattison designs and makes decals as a hobby, so when Jordan’s mother Andrea approached him to make her a “Find Jordan” decal, he agreed.

“Around the same time, I was noticing the posters were getting old and decrepit and that’s really sad to see. But also, the community wants to keep the awareness up, so I just saw an opportunity to keep that going,” he said.

He was on his way back to his house after visiting a friend, but he never made it.

Pattison said Jordan’s disappearance has been hard on his family, as his wife is Jordan’s mother’s cousin.

After Andrea approached him, Pattison said he planned to hand out just a few more on his own to several friends but the response was overwhelming as more and more people asked for more.

He started giving people his home address so they can pick up decals from him instead. This way,  he said he could keep better track of how much decals were available. The word spread so fast that a couple of businesses have offered to help him distribute them.

“As well, I’ve got one business that actually donated a few dollars for materials to make sure that I have enough to give to everybody.”

He said the support all pointed to the fact that residents still are on the lookout for Jordan, and that they want him found.

Starting on Monday May 13th, those interested can pick up a decal from Your Island Kitchen Depot (900A 12th Ave) in Campbell River and Obsessed Auto Detailing (380 Old Island Hwy) in Courtenay during business hours.

Others can still contact Dan Pattison to pick up decals from him.