Dead and dying salal plants ‘everywhere’ along the coast 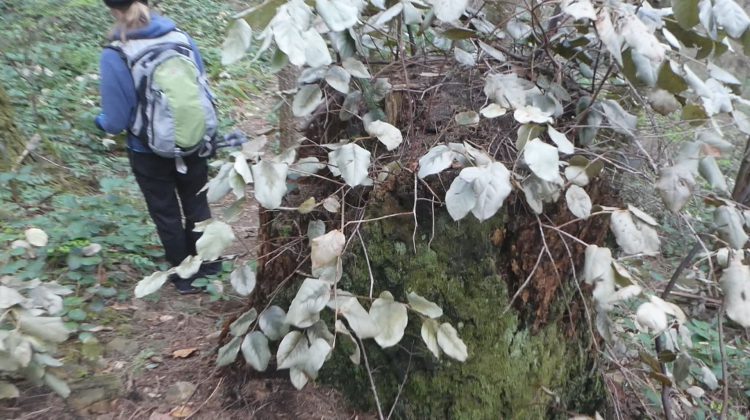 Catherine Temple, who helps runs the Facebook page Go Hiking Vancouver Island, said salal plants are dying across the coast, and she warns that the implications could be far reaching. Photo courtesy Catherine Temple

VANCOUVER ISLAND, B.C. – Catherine Temple believes that she is seeing a natural disaster unfold before her eyes.

Temple, who runs the Facebook page Go Hiking Vancouver Island, said salal plants are dying across the coast, and she warns that the implications could be far reaching.

She is sounding the alarm after seeing huge swaths of dead or dying plants during her hikes.

“Some people are saying that it’s just the dry weather,” she said. “No, I don’t agree with (them), because even along the lines of the beaches and the lakes and the streams, they’re the first ones to go. They’re really dead. So it’s everywhere.”

Salal is a staple for the deer population during the winter months, according to Temple.

“So we’re going to see deer coming into town for food,” she added. “That’s my way of looking at it, anyway. This isn’t a small thing. This is happening from Port Renfrew right up to Port Hardy, as well as I’ve heard from people on Salt Spring Island, in from Powell River, from Washington State, Quadra Island… it’s everywhere.”

Richard Hamelin, a professor of forest pathology at UBC’s Faculty of Forestry is also concerned about the hardy plant withering away and dying.

He said extreme weather events are putting stress on the salal plants.

“We’ve had severe weather events in the last year and we think it’s a combination of those unusual weather events that’s causing the mortality,” Hamelin said. “The drought from last summer and that continued into the winter, and also this really cold snap, the polar vortex last winter.”

Temple said she first noticed the problem during a hike at Mohun Lake in Campbell River.

“And then we took a hike up at Goose Lake, and we started noticing it there, as well,” she said.

Later, during a trek around the back end of Menzies Mountain in Campbell River, she noticed a whole side hill had either dead or dying salal plants.

“That was huge,” she said. “That’s the one that I actually posted on Facebook because it was everywhere.”

The next weekend, during a hike on the Campbell River Lookout Trail, she saw more dead or dying plants.

She theorized that a weather anomaly, with huge swings below and above freezing within a couple of days, could have had a hand in killing the plants.

“The roots are very, very shallow, so it can take a certain amount (of temperature changes) but it can’t take that over and over again,” Temple said. “And because it’s so prevalent, it can’t be a bug, because it wouldn’t be on the islands, but it is.”

Temple said this is “our canary in the coal mine,” adding that salal plants provides a vapor barrier for all the mushrooms, mycelium, and fungus below them.

“So if that’s all dead, then first of all, you’ve got the requiem for a massive fire because I don’t think they’d (firefighters) ever be able to go out and put out a fire that’s in dead salal,” she said. “The other end of it, what happens to the mushrooms? If it’s got dead salal on top of it, that’s what covers the mushrooms and keeps the moisture in. The mushroom goes, the mycelium goes, and so does the fungus. The fungus goes, the forest goes.”

Hamelin said since pests, disease, and pathogens haven’t been linked to the mortality, thus far, extreme weather could be to blame.

He said one of two things will happen: either the salal will recover and re-sprout, or, in a waste-case scenario, “there could be some dramatic changes in the ecosystem.”

“We know salal plays an important role,” Hamelin said. “It’s such an important part of the understory in the forests that it’s probably going to affect other species that are depending on it like mushrooms and any kind of other plants. It provides cover so the affect at this stage is unpredictable if it does not recover. The hope is that it will recover.”