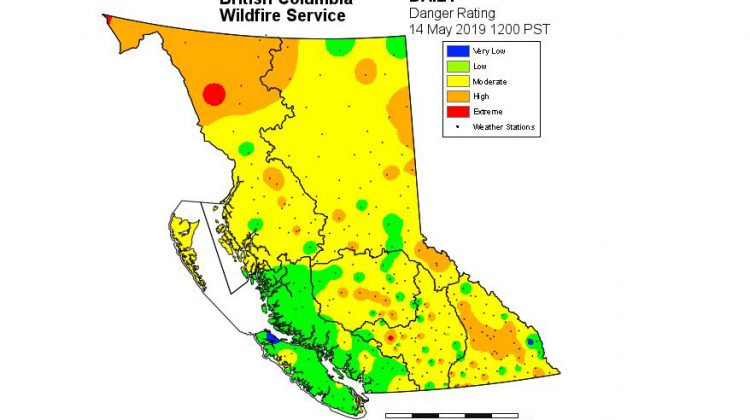 BC Wildfire fire danger map as of May 14. Map courtesy BC Wildfire Service

The fire danger rating has been reduced to low from last week’s moderate and high through much of the region, which encompasses all of Vancouver Island and coastal B.C.

On the BC Wildfire fire danger map, green represents a low fire risk, yellow is moderate, orange is high, and red is extreme.

On Wednesday morning, much of the region is coloured green, thanks to some much-needed rainfall combined with cooler temperatures.

“Coastal Fire Centre has had a series of fires start because of the warm weather,” she said. “We’re up to about 27 fires throughout our fire centre and usually at this time of year we have around 13.”

All of the fires have been human-caused, from people doing open burning and high risk industrial activities during the dry period.

“That’s been reduced a little bit now that we’ve picked up a bit of precipitation and the temperatures have come down,” Jakobsen said. 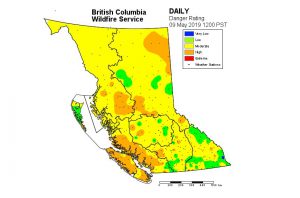 BC Wildfire fire danger map on May 9.
Map courtesy BC Wildfire Service

For residents of communities that still allow backyard burns, the Coastal Fire Centre is urging them to use caution, even with more seasonal temperatures upon us.

“We’re asking people to monitor the fire,” she said. “That means standing beside (the fire). That doesn’t mean from inside. We need you to fully extinguish it when you’re done.”

Jakobsen said wind gusts play a huge role in causing backyard burns to get out of control.

“Don’t burn in windy conditions,” she said. “And be very careful. Make sure you put that (fire) out cold before walking away from it.”

About the Coastal Fire Centre

Province announces 12 new cases of COVID-19 over the weekend

B.C tourism organizations getting help thanks to provincial grant