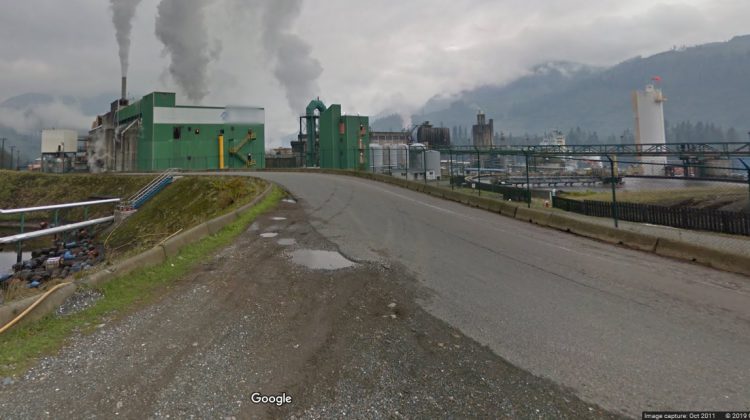 The Port Alice mill is pictured in a 2011 image sourced from Google Streetview.

PORT ALICE, B.C. – Arterran Renewables could be bringing a processing plant to Port Alice’s Neucel mill, and with it, comes the prospect of roughly 250 jobs in the village.

Arterran’s director and chief technical officer Lloyd Davis said that whether it’s the Neucel Specialty Cellulose Mill or another location on northern Vancouver Island, the company has been looking at the North Island for a number of years, now.

“There are a lot of suitable locations,” Davis said. “We happened in February upon the Neucel mill and were introduced to the mayor of Port Alice and some directors from the Mount Waddington district. It’s a beautiful location with excellent logistics and we’re now just working with the Ministry of Forests to see if we can secure enough fibre or waste fibre in the area that will make it practical to do a project.”

Arterran’s Advanced Fuel (AAF) is made from biomass, which the company describes as “the world’s only renewable carbon.”

Davis explained how the process works.

“We spent eight years developing a product to replace the coal that’s currently used in power plants to produce electricity,” he said. “What Mother Nature does over 135 million years in making coal, we’ve knocked it back to about 90 minutes.”

Using waste fibre from forestry operations, Arterran produces a coal substitute that has all the attributes of coal as far as energy density, and it also burns the same but without the toxic emissions of coal, according to Davis.

“And of course it’s carbon neutral because we’re using a renewable and sustainable feed stock,” he added.

“The process is (no) different than your mom’s pressure cooker,” Davis said. “You throw it in the pressure cooker with some herbs and spices and in our case, a proprietary catalyst, cook it up for a little bit, recycle the catalyst, and what’s left over has the same energy density as mid-grade coal, the type they use at coal-fired power plants.”

In the meantime, Arterran is “very serious” about moving to the mill, said Davis, who laid out a timeline.

“Next steps is continuing on with the negotiations for the mill,” he said. “We’re talking to the lead in China, and as soon as we’ve secured that location, then our next steps are working with the Ministry of Environment, the Ministry of Forests and the provincial government, as well as the local government to make sure all the pieces are in place.”

He estimates that in the next 60 days, there should be an announcement about whether or not Arterran is moving to Port Alice.

And wherever Arterran moves to on the north island, jobs will follow.

“We’d be looking at probably doing, with direct employment, somewhere in the 250 full time employees per location, and then there’s a lot of secondary work that needs to be done with contractors and forestry operations to supply us with feed stock,” he said.

From an economic point of view, “we’re looking at probably adding a $20 million payroll to whichever area that we end up landing in,” Davis added.